Archaeologists Find Over 20 Coffins Just As Ancient Egyptians Left Them

Egyptian officials have not given the time frame from which the coffins date, but the site where they were found was once part of the ancient city of Thebes. 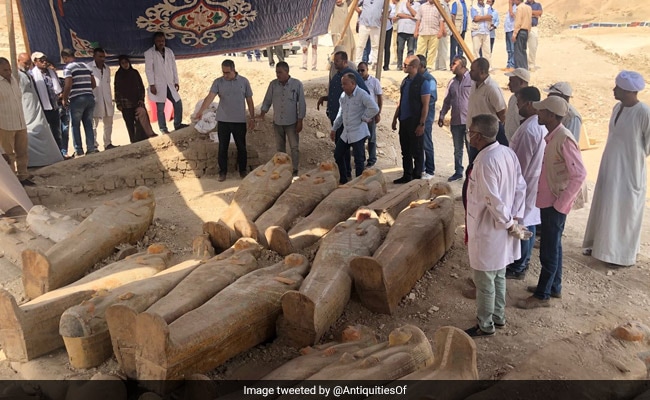 The coffins were found in Assasif, a necropolis on the west bank of the Nile River.

The Egyptian government is hailing the discovery of more than 20 wooden coffins as "one of the largest and most important" archaeological finds in the past few years.

The coffins were found in Assasif, a necropolis on the west bank of the Nile River.

Egypt's Ministry of Antiquities tweeted images of the "intact and sealed coffins" Tuesday. The sarcophagi, which were stacked in two layers in a large tomb, still boasted their original carvings of faces and hands and colors of red, green, white and black that have not faded much over time.

The Antiquities Ministry tweeted images of the coffins on Tuesday.

Egyptian officials have not given the time frame from which the coffins date, but the site where they were found was once part of the ancient city of Thebes.

Thebes was the royal capital of the ancient Egypt. Early monuments can be traced as far back as the 11th dynasty, which occurred between 2081 and 1939 BC.

Authorities said more details about the coffins would be divulged in a news conference Saturday.

Egypt is on a roll with its digging into the past.

Last week, the Antiquities Ministry announced that archaeologists had found 30 workshops for the manufacturing and processing of funeral furniture for the tombs of kings in the Valley of the Kings, which served as the primary burial site for pharaohs from the 18th to the 20th dynasty. Researchers found a kiln for producing pottery and metal, where items such as silver rings and gold foil were also uncovered. The workshops, dated from 1539 BC to 1292 BC, CNN reported. 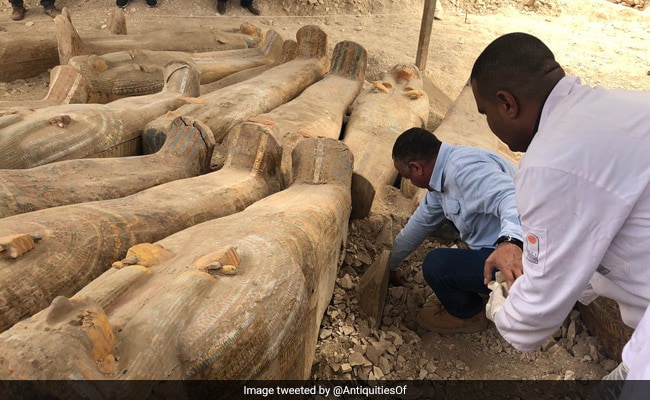 The Antiquities Ministry tweeted images of the coffins on Tuesday.

An archaeological mission has been underway in the Valley of the Kings since December 2017, according to the Antiquities Ministry. There's a plan to search for the tombs of Queen Nefertiti and her daughter, who was King Tutankhamen's widow. Researchers are also searching for the burial sites of three major pharaohs - Ramses VIII, King Thutmose II and King Amenhotep - in addition to finding tombs for queens in the Valley of the Queens.

(Except for the headline, this story has not been edited by NDTV staff and is published from a syndicated feed.)
Comments
EgyptcoffinsArchaeologists