Nightclub Stampede In Italy: Local reports said around 1,000 people were in the Blue Lantern club in the town of Corinaldo on the Adriatic coast for a performance by Italian rapper Sfera Ebbasta. 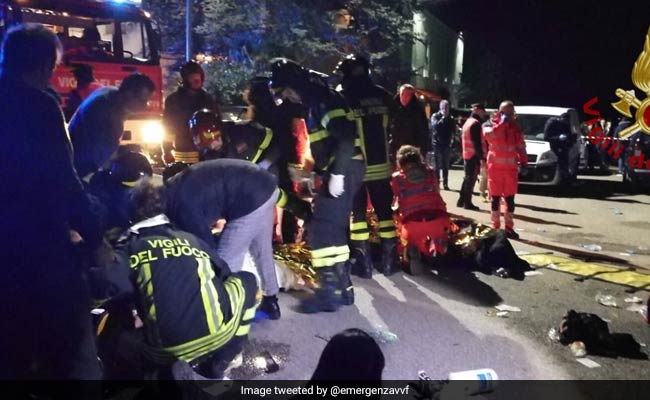 Italy Stampede: 6 people have died in a stampede at an Italian nightclub.

At least six people died and dozens were injured in a stampede when panic broke out during a rap concert at an Italian nightclub early Saturday. Media reports said the suspected use of a pepper spray-like substance sparked the chaos at the venue in the town of Corinaldo, near Ancona in central Italy.

"The cause may have been the dispersal of a stinging substance, the young people fled and trampled over each other. Sadly, six people died and dozens are injured," the fire service said in a statement on Twitter.

The victims include five people under the age of 18 -- three girls and two boys - and an adult woman who accompanied her daughter to the concert.

Local fire chief Dino Poggiali said that 14 of the injured were in a critical condition, and 40 less serious.

As the crowd panicked, people ran for the three emergency exits, one of which led to a small bridge and the car park, according to a preliminary investigation.

The force of the fleeing crowd made a railing collapse and dozens of people fell, crushing those below to death.

A pile of abandoned shoes testified to the chaos of the stampede, with survivors and the bereaved weeping outside the nightclub as emergency vehicles tended to the injured, local newspaper Ancona Today reported.

"It can't be! You can't die like that. Wake up Mattia, I beg you," one unnamed woman cried as she knelt by her son's body, the paper said.

Around 1,000 people -- many of them young -- were in the Lanterna Azzurra (Blue Lantern) club for a performance by Italian rapper Sfera Ebbasta, known as "the king of the trap" for his style of Hip Hop.

"We were dancing and waiting for the concert to start when we smelt this pungent odour," a 16-year-old boy who was taken to hospital told the media.

"We ran to one of the emergency exits but we found it blocked, the bouncers told us to go back."

The injured were taken to hospital in the nearby town of Senigallia and the most serious on to Ancona.

In 2017, a woman died and 1,500 were injured in a crush during the outdoor broadcast in Turin of a Champions League football match final when rumours of a bombing sparked panic.

Around 30,000 people had gathered in June last year to watch the broadcast from Cardiff, Wales, of the local team Juventus play Real Madrid when pepper spray was shot into the crowd as part of a robbery attempt.

Erika Pioletti, 38, died two weeks later after being left in a coma by the crush. She had gone to watch the game in the square with her boyfriend.

Eight people were arrested on suspicion of causing the scramble by dispersing the irritating substance.