Russia vs US Super-Power Games Are Destroying Syria 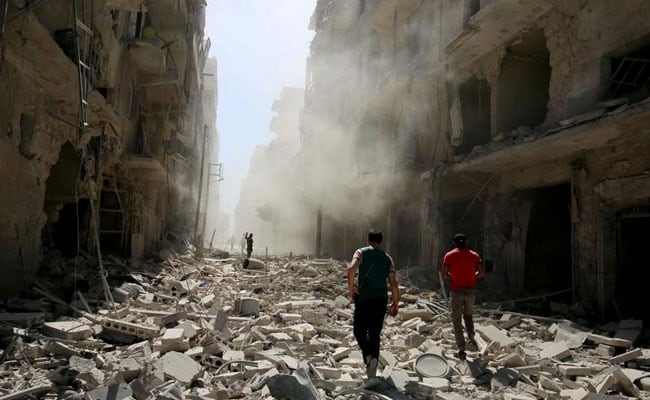 Men inspect the damage after an airstrike on the rebel held al-Qaterji neighbourhood of Aleppo, Syria

The world is dangerously divided over a gruesome war in Syria that is killing hundreds of thousands and generating millions of refugees.

The big questions: is America's strategy in Syria backfiring and ironically helping ISIS get even stronger? Or is Russia merely supporting a dictatorship - the Assad government - in a narrow political game? The UN Security Council over the last few days has been more tense than in recent memory - the accusations and abuse almost mirror what's happening on the ground in Syria.

Syria is a country on fire. Who's to blame?

Syria finds itself in the middle of two deadly proxy wars.

The first is a war between super powers - America and Russia. America's aim is to get rid of Russia in the region - to break Russia's historically close relationship with the Syrian rulers, the Assad family. America's public pretext though is quite different - it doesn't say the the main target is Russia's (and Iran's) close ties with Assad. America claims Assad is a dictator and they only want to establish democracy in Syria.

The second conflict that Syria is unwittingly right in the middle of is the war between Sunnis and Shias, a conflict that underlies virtually every aspect of violence in the Middle East. Syria's government is Shia - more specifically it is Alawite which is a Shia sect, which is why it is supported by Shia nations like Iran - and attacked by all Sunni nations like Saudi Arabia. In fact most Middle East nations, and Pakistan, are Sunni.

Most experts now accept that the billions of dollars spent by America and Saudi Arabia to finance extremist forces that are opposing the Syrian government eventually ended up financing and helping ISIS forces. ISIS is of course Sunni, which is why ISIS is fighting the (Shia) Alawite-secular government in Syria.

The crisis for America is that any ceasefire with Russia goes against the original American aim in the region. In fact, the ceasefire has strengthened both Russia as well as the Syrian government in the region. Which is the primary reason why this pact with Russia is reported to have caused a division between Obama and the Pentagon - Obama is for the ceasefire while the Pentagon is against it as they feel it benefits Russia. Lt. Gen. Jeffrey L Harrigian of the US Air Forces Central Command had already publicly criticised the ceasefire.

Many analysts say that in this internal power tussle between Obama and the Pentagon, it was the Pentagon that was behind last week's ghastly bombing shortly after the ceasefire was signed. This was no "mistake" as America claimed it was.

The Assad government that's is in the bullseye of this Middle East crisis is undoubtedly dictatorial. At the same time it is also one of the most secular governments in the region and in a country where all religions, including millions of Christians live together peacefully. Moreover, the women of Syria are the most educated and liberated in the region.

The Assad regime is clearly ruthless. This is exposed after the breakdown of the cease fire: the Syrian government-Russian aerial bombardment of eastern Aleppo has been remorseless with no concern for civilian causalities.

A major concern is what kind of regime will replace the Assad government if the extremist Islamic forces do manage to overthrow the Syrian government. Will this be another unintended American blunder in the Middle East?

While America and Russia fight their superpower war-games, and the Sunnis remain obsessed with obliterating the Shias, the people of Syria are dying. And their beautiful country is destroyed in this dual war in which Syria would prefer to be no part of. The war in Syria is perhaps one of the most unjust and brutal wars in the last century.
Comments
SyriaAmerica's strategy in SyriaISISRussiaUN Security CouncilAssad government