An American Airlines Passenger Was Refused Beer - So He Screamed, Fought And Spit Blood, FBI Says

The man hurled slurs, fought and spit blood at passengers when he was refused another beer, according to the FBI. 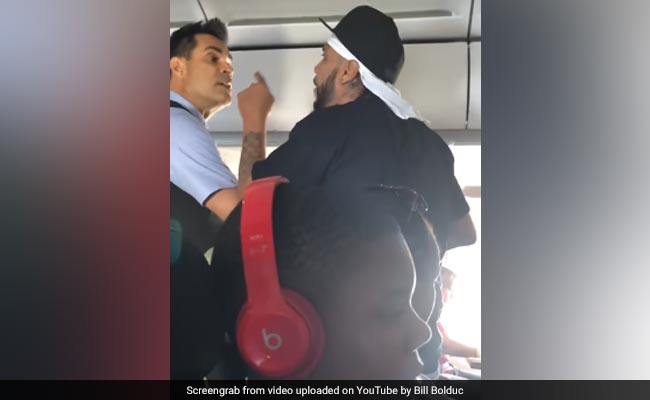 "You need to please sit down. You're not drinking any more beers," an attendant said.

It began, as so many plane debacles seem to, with strange sounds in the bathroom.

They were the noises of Jason Felix, one of the passengers on Wednesday's American Airlines flight out of Saint Croix, according to a FBI affidavit recounting events leading up to his arrest.

A flight attendant at the back of the plane could hear Felix rummaging around, opening and closing cabinets. When the attendant opened the door to check, Felix slammed it back shut and relocked it.

The passenger emerged some time later, in his "Unity" T-shirt, and cursed out the flight attendant as he made his way back to seat 17 B.

Another man had the aisle seat. He had been getting up each time Felix got up or sat down, listening each time Felix ordered a beer from the same attendant he insulted with slurs.

The man was a police officer in the U.S. Virgin Islands, he would later tell the FBI. He said he knew Felix there - or at least knew of him by reputation, which was apparently not good, and whatever had agitated him in the bathroom did not bode well for the rest of the flight.

Flight 1293 made good time from Saint Croix. It had been in the air about an hour when Felix pushed the button to summon the attendant and order another beer - and the attendant refused.

This time, the FBI agent wrote, Felix did not wait for his seatmate to let him out but climbed over the man's lap, swearing at the flight attendant and chasing after him to demand service.

"You need to please sit down. You're not drinking any more beers," the attendant said, as seen in another passenger's video. "We'll be there in an hour!"

But Felix kept arguing, waving his arms in the attendant's face. His neighbor was now standing, too, frowning at the back of Felix's head.

"Are you my bartender?" Felix asked.

"Yes, I'm your bartender," the attendant replied, and began to walk away.

He made it a few steps, the FBI agent wrote, then turned around to see Felix entangled with his seatmate. "They appeared to be hitting each other."

The man later reported that Felix spit blood at him, and tore off his plaid shirt. In video recorded by Bill Bolduc, from across the aisle, the two men are wrapped around each other while two other passengers attempt to pull them apart.

The passengers eventually push Felix back down into his seat, alternatively wrestling with him and attempting to soothe him while the pilot's voice comes over the speakers, asking everyone to fasten their seat belts.

"I'm gonna to kill you. I know you are a cop," Felix screamed at the man from the aisle seat, according to the FBI affidavit. He was so enraged that a flight attendant asked the officer to move to another seat, so the men couldn't see each other.

"Chill out," said one of two passengers who had gotten up to hold him still, his arms wrapped around Felix in a bear hug.

At some point, a flight attendant handed one of the passengers a pair of wrist restraints, though in the end they did not prove necessary. The flight crew and passengers managed to get him seated for the rest of the flight.

Bolduc, the video maker, told WSVN that Felix remained agitated for the remainder of the flight, though at least there were no more fights. He tried to order alcohol again, according to the FBI, and when served water, gave it to another passenger.

In Bolduc's final video, after landing in Miami, Felix has put on sunglasses and put back a hat he seemed to lose in the fight.

At least four police officers boarded the plane. Felix pulled out his ear buds, seemed to argue with them for a few seconds, but eventually let them escort him off the plane.

He was arrested and ordered to be held until a detention hearing on Tuesday, facing a charge of interfering with flight crew that carries up to a 20-year sentence.

Promoted
Listen to the latest songs, only on JioSaavn.com
His public defenders did not immediately respond to a request for comment.