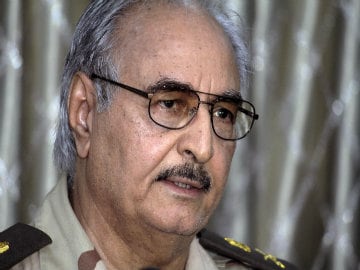 In this Saturday, May 17, 2014 photo, Libyan Gen. Khalifa Hifter addresses a press conference in Benghazi, Libya. The death toll from fighting over the weekend in Libya's eastern city of Benghazi between troops loyal to Hifter, a rogue general, and Islami

Tripoli, Libya: A security official and witnesses say airstrikes have targeted a militia camp in Libya's eastern city of Benghazi, sending columns of black smoke into the air and sparking retaliatory gunfire.

Hifter has rallied the support of the country's politicians, tribes and army units.

February 17, founded by Islamist Abu Katef, is one of the biggest and most powerful militias in Benghazi. Its forces originate in the rebel brigades that toppled longtime dictator Moammar Gadhafi.

The official says the militia responded with anti-aircraft fire. The official spoke on condition of anonymity because he was not authorized to speak to journalists.

Promoted
Listen to the latest songs, only on JioSaavn.com
Witnesses say panicked residents fled the area.