Airline Crew Member Tried To Smuggle $160,000 Worth Of Cocaine In His Pants, Prosecutors Say 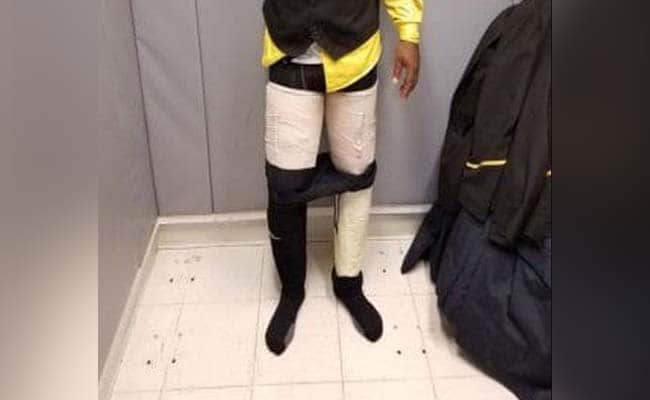 Hugh Hall was found with four packages of white powder strapped to his legs, hidden beneath his pants

Federal officials said that during a security search late last week, Hugh Hall, a Jamaican citizen, was found to have four packages filled with white powder strapped to his legs and hidden underneath his pants. Authorities confirmed that the substance was cocaine - about $160,000 worth, according to a statement from U.S. Customs and Border Protection.

Federal officials said Hall and the other crew members from Fly Jamaica Airways Flight 272 were selected for inspection Saturday at the airport in Queens, New York. During pat-downs, Customs and Border Protection agents felt an object around Hall's leg, according to a complaint filed in U.S. District Court for the Eastern District of New York.

When questioned by agents, Hall, who was flying from Montego Bay, Jamaica, said that the substance was cocaine, according to the court records.

He appeared in court Monday and was ordered to be detained, according to the U.S. attorney's office.

"This seizure is another example of our CBP officers being ever vigilant in protecting the United States from the distribution of illicit drugs," Leon Hayward, acting director of the Customs and Border Protection's New York field operations, said in the statement.

Cocaine comes from coca leaves grown in South America and about 90 percent of the powder shipped to the United States is produced in labs in Colombia, according to the Drug Enforcement Administration.

Representatives for Fly Jamaica Airways did not immediately respond Thursday to requests for comment about the incident in New York.


(This story has not been edited by NDTV staff and is auto-generated from a syndicated feed.)
Comments
Airline crew smuggles cocainecocaine smugglingFly Jamaica Airways