Ahead of vote, 'kidnapped' Iran reformists imprisoned at home 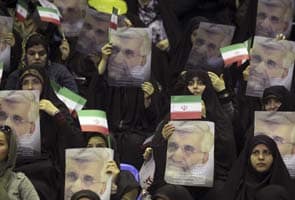 Dubai: Four years after Iranians took to the streets to demonstrate against the results of a presidential election, the authorities are taking no chances this time, keeping opposition leaders confined under house arrest with doors and windows welded shut.

When Iran elects a new president on Friday, authorities are determined to prevent a repeat of the street unrest that posed the biggest challenge to the Islamic Republic's ruling system since its birth in the 1979 revolution.

Mirhossein Mousavi and Mehdi Karoubi, who as reformist candidates led the "Green Movement" that disputed the 2009 election result, have not been charged with crimes. But both men, former top officials now in their 70s, are being kept locked indoors, under constant surveillance and with little contact with families who fear for their health.

"This is illegal even according to our laws and regulations," Karoubi's son Mohammed Taghi Karoubi said from Britain. "No one has officially taken responsibility for this illegal action."

The government's firm grip ensures that there is unlikely to be any repeat of the unrest of 2009, when the authorities violently suppressed demonstrations and dozens of people were killed, hundreds wounded and thousands arrested.

Since then, with prices rising and unemployment surging because of international economic sanctions imposed over Iran's nuclear programme, public discontent is arguably higher than ever but reformists among the leadership have been sidelined.

The approved slate of candidates is dominated by hardliners, and the winner is expected to be a conservative close to Supreme Leader Ali Khamenei.

Mousavi and Karoubi have been under house arrest for more than two years, since calling for a rally in support of protests that swept the Arab world in 2011.

Supporters describe their captivity as "kidnapping" by authorities desperate to block reforms. At rallies and at a funeral for a dissident cleric this month, crowds have shouted for them to be freed.

Sources close to their families have provided Reuters with details of their captivity, painting a picture of an intensely lonely existence with virtually no contact with the outside world and all their activities controlled by security forces.

There is no foreseeable end to their detention. They have never been charged officially with a crime, though hardliners have called for their execution for "sedition".

Mousavi, 71, is being held at his own home off central Tehran's Pasteur Street along with his wife, Zahra Rahnavard, 67, a prominent artist, sculptor and academic.

The house, in an area of government buildings not far from Khamenei's own residence, has been turned into a prison. Two of the doors are welded shut and authorities keep constant watch over the third door.

Cameras were installed all around the house, as well as floodlights and surveillance devices. All door handles inside have been removed so doors will not fully close, denying the couple privacy, said a source close to their daughters.

"The (security forces) team overseeing this kidnapping are rude, foul-mouthed, and violent," said the source, who described the conditions of their captivity on condition of anonymity.

"They have said, 'They have no religion, and whatever we do to them they deserve it. They are servants of the U.S. and Britain,'" the source said.

Reuters was not able to contact the Mousavi family directly and details cannot be independently verified.

Mousavi, an architect, served as Iran's last prime minister from 1981 until 1989 when the position was abolished under constitutional changes.

For the next two decades he was largely out of the public spotlight until he ran in the 2009 election, emerging as the leading candidate for the reform movement. His wife Rahnavard campaigned for him, breaking new ground in Iranian politics.

For the first two months of the couple's house arrest, security forces moved into the bottom floors of their home and a neighbouring building, said the source.

"During this time, they had no newspapers, books, paper, or writing implements," the source said. "All the windows had been welded shut and these two were imprisoned in a room on the top floor of the house."

In those first months, Rahnavard suffered from breathing problems, probably due to a lack of fresh air. Officials ignored her complaints, the source said, until Mousavi broke a window open with his fist, injuring his hand. Officials then allowed one window to be opened a bit to let air in.

Rahnavard has lost 17 kg (37 pounds) and suffers from arthritis. Mousavi, 71, has lost 12 kg (26 pounds), the source said, and was taken to hospital in August for blocked blood vessels.

Mousavi at one point fell unconscious for two hours within view of a security camera, but despite Rahnavard's pleas for help, no one came to assist them, the source said. Their family has requested their medical files but authorities have refused.

Some early restrictions on the couple were eventually eased, and they were granted family visits, the source said. But family members still often go months with no news of their welfare.

In the few visits allowed, security forces are present, and they must speak "only about family issues and with loud voices. If voices drop, officials will issue a sharp rebuke. Mousavi and Rahnavard constantly argue with the security forces and say this is how they spend their days," the source said.

"The visits are limited, few in number, are under security, and stifled, and it's impossible to find out what's really going on," the source said.

Formerly early risers Mousavi and Rahnavard now go to bed late and wake up late. Religious rites like reading the Koran and performing their prayers punctuate their daily routine. They have sometimes been provided with art supplies, and have done some drawings together, the source said.

The pair have periodic access to a yard with a garden. They are given no newspapers, magazines, or radio, but can watch state television. The couple is sometimes given access to their library - which the source estimated contained 150,000 books.

"PLEASE DON'T ASK ME TO SAY ANYTHING"

The other opposition leader, Karoubi, a former speaker of parliament, was first confined to his home in northern Tehran and later moved to a three-story safe house in the capital provided by the Intelligence Ministry.

He occupies one floor and the security services occupy the other two, said his son Mohammad Taghi Karoubi. There is no garden and he has no access to fresh air.

Karoubi, 75, was taken to hospital in November after showing symptoms including weight loss, dizziness, and nausea, the opposition Sahamnews website reported at the time.

"At the moment his health is in good condition," his son said. "He is in great spirits."

He is allowed to watch state television and is provided three state-owned newspapers to read. His requests to read other papers were refused.

Another son, Mohammad Hossein Karoubi, has only been allowed to visit his father once in the last seven months, for the Iranian New Year in March, Mohammad Taghi Karoubi said. Other family members have recently been allowed weekly visits that last 2-3 hours in the presence of security officers.

Because of their isolation, Karoubi, Mousavi and Rahnavard have decided to make no comment on Friday's election.

"Under the present situation, his information about various issues in the country in general and the election in particular is so little," Mohammad Taghi Karoubi said of his father.

"Recently he told my brothers: 'I respect my friends' decision over the election, but please don't ask me to say anything because I won't say anything.'"

Although they refrain from political statements, the opposition leaders still have influence in Iran.

Under house arrest, Mousavi has started what amounts to a book club for his followers. In 2011, he compared his captivity with "News of a Kidnapping," Gabriel Garcia Marquez's non-fiction book about prisoners held by a Colombian drug cartel. His recommendation made the book an overnight hit in Iran.

In 2012, he recommended "The Right to Heresy" by Austrian writer Stefan Zweig, about 16th century theologian Sebastian Castellio, who preached tolerance and opposed Protestant leader John Calvin for executing heretics over religious differences.

Zweig quotes Castellio as writing: "We can live together peacefully only when we control our intolerance. Even though there will always be differences of opinion from time to time, we can at any rate come to general understandings, can love one another, and can enter the bonds of peace, pending the day when we shall attain unity of faith."

Promoted
Listen to the latest songs, only on JioSaavn.com
The source close to Mousavi's daughters said he recommended the book to show the parallels with Iran and "a way to analyse the situation and combat it".

Mousavi had the following message for Iran's authorities, the source said: "You cannot stop the movement which has started, even through severe repression, and it will answer against your will. I will use any opportunity and shout and say what I have to say. Even if just one passerby hears it, they will convey it to others."
© Thomson Reuters 2013