After "Trump Baby", Protesters Will Fly Blimp Of London Mayor In A Bikini

Protesters plan to fly a blimp of London Mayor Sadiq Khan clad in a bikini over Parliament Square on Saturday. 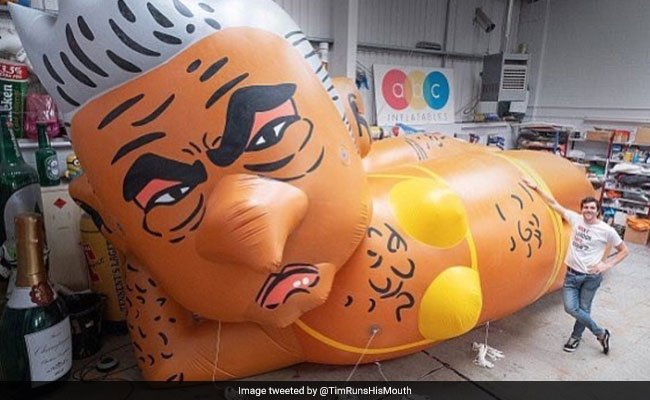 The pouty-faced "Bikini Khan" is intended to call attention to the rise in violent crime in London.

Remember the "Trump Baby" balloon depicting the U.S. president in diapers clutching his cellphone and throwing a tantrum, the one that protesters flew beside the Palace of Westminster during his visit to Britain in July?

London's liberals were having a laugh. "Never has an inflatable gotten such international media attention," The Washington Post reported.

Protesters plan to fly a blimp of London Mayor Sadiq Khan clad in a bikini over Parliament Square on Saturday.

The pouty-faced "Bikini Khan" is intended to call attention to the rise in violent crime in London (more below).

About 3,400 people have pledged around $75,000 so far to an Internet group - "Make London Safe Again" - to fly the 29-foot-long balloon, according to the Crowdfunder page.

The mayor, who gave permission for the Trump Baby blimp to float in the restricted airspace over Westminster, was taking "Bikini Khan" in stride.

"If people want to spend their Saturday looking at me in a yellow bikini, they're welcome to do so," he said. "I don't really think yellow's my color, though."

Yanny Bruere, 28, the brain behind the latest blimp, said "Bikini Khan" was done "in retaliation to the Donald Trump balloon being approved by Sadiq Khan in London."

"I didn't think it was very fitting to do that to a great ally and the president of America, and I didn't think it would have been approved if it had been Barack Obama, for example. So I decided to test that free-speech angle and threw an application in to see if Sadiq Khan would be willing to submit himself to the same mockery as he's willing to impose on the leader of the free world," Bruere said.

Now that the Khan blimp has been given approval? Bruere said it was probably because the Trump balloon came first.

The choice of a bikini is a reference to a 2016 advertising campaign that featured a young woman in a yellow two-piece that Khan had removed from buses, subways and transit stations for promoting "unhealthy or unrealistic" body images.

The ad asked, "Are you beach body ready?" and touted a weight-loss remedy.

"It made sense to put Khan in a bikini," Bruere said. "It's summer time. He gets to show off his physique a little bit."

That both Khan and Trump should be honored with dueling blimps makes a bit of sense.

The two have a history.

During Trump's 2016 presidential campaign, Khan predicted that his populist rhetoric would flop with voters.

Then after Trump's surprise victory, Khan said it would be "inappropriate" to invite Trump to meet the queen for a state visit because of his call for a ban on U.S. travel from predominantly Muslim countries.

Khan is a Muslim, the son of a Pakistani immigrant bus driver.

Just hours after a terrorist attack in London in June 2016, Trump tweeted, "At least 7 dead and 48 wounded in terror attack and Mayor of London says there is 'no reason to be alarmed!' "

In a May speech to the National Rifle Association in which he referred to knife crimes in London, Trump alleged that there was "blood all over the floors" of a hospital in the British capital that he compared to a war zone.

In an explosive interview with the Sun tabloid that published during his July trip to London, Trump charged that Khan was doing a "bad job on crime" (he also said Prime Minister Theresa May was botching Brexit; the next morning, he backtracked on the Brexit comment during a news conference).

The people behind the Khan blimp echo Trump's criticisms. The Facebook page promoting the protest states, "Under Sadiq Khan, we have seen crime skyrocket to unprecedented levels. People in London don't feel safe and they aren't safe."

Bruere said he wanted to highlight how "the crime in London under his [Khan's] watch is particularly bad." He said that instead of "political point-scoring against Donald Trump," Khan "should be making London a safer place."

The mayor, a rising star in the Labour Party, is still pretty popular.

Two years into his term, a YouGov survey in April commissioned by Queen Mary University of London found that 52 percent thought Khan was doing a good job, compared with 30 percent who said he was doing badly. But the survey also found large majorities saying crime overall had gotten worse, especially knife crime.

The Metropolitan Police has launched more than 80 murder investigations in London since the start of 2018. Most of the victims were stabbed.

London's knife killings have generated a lot of ink, especially the news that the British capital surpassed New York City in the number of homicides for a month earlier this year.

The mayor's supporters say violent crime has increased across both England and Wales, not just London, and that both New York and London are relatively safe cities, especially when compared with Venezuela's Caracas, South Africa's Cape Town and Mexico's Acapulco - as well as U.S. cities such as Baltimore, St. Louis and Chicago.