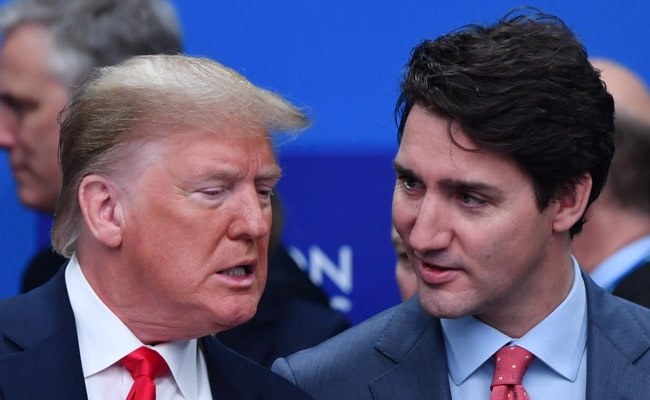 President Donald Trump, who has demeaned his rivals for being laughed at around the world, found himself the scorned child on the global playground at a NATO summit here Wednesday, as widely circulated video showed leaders gossiping about and mocking him.

The video, captured at a Buckingham Palace reception Tuesday evening, appeared to show Canadian Prime Minister Justin Trudeau, French President Emmanuel Macron, British Prime Minister Boris Johnson and others laughing about Trump's freewheeling news conferences earlier in the day. "I just watched his team's jaws drop to the floor," Trudeau told the others, dropping his hand toward the ground to dramatize his retelling.

And so it was Wednesday morning that Trump presented a sulking, brooding president, as he slapped down Trudeau as "two-faced" and engaged with other foreign counterparts at a secluded estate here outside London.

As the summit concluded, Trump abruptly canceled a planned news conference, arguing that he had already answered so many questions from reporters in other settings during his visit to Britain.

He took off for Washington as the House Judiciary Committee's impeachment hearing was underway.

Though his conduct here fit his pattern of disruption at international summits, Trump did not make the fiery threats that have punctuated previous gatherings. NATO leaders were almost giddy as they survived another encounter with Trump with their alliance intact. Trump's canceled news conference - eliminating one last chance for him to take aim at them - was to many the departure gift.

The day's drama centered around Trump and Trudeau, who previously feuded at the Group of Seven summit in 2018. Asked Wednesday by journalists about Trudeau's mockery, Trump fired back at the Canadian prime minister.

"Well, he's two-faced," Trump said of Trudeau. "And honestly, with Trudeau, he's a nice guy. I find him to be a very nice guy. But, you know, the truth is that I called him out on the fact that he's not paying 2 percent and I guess he's not very happy about it."

Trump was later caught on an audio recording bragging to an unidentified summit attendee, "That was funny when I said that guy was two-faced." The president's son, Donald Trump Jr., tweeted a photo of Trudeau wearing blackface that he said was "evidence" that the Canadian prime minister was "two-faced."

Trudeau on Wednesday explained his Buckingham Palace comments by telling reporters that he had been referring to Trump's announcement that he would host the next Group of Seven summit at Camp David, which the Canadian leader thought surprised White House aides. Trump had initially proposed his own Doral golf resort in Miami for the next G-7, but abandoned that idea after being criticized for self-dealing.

Trudeau said he was "pleased" to recount the Camp David moment to fellow leaders and that Canada's relationship with the United States remained "extraordinarily important and effective."

Trump's visit to the NATO summit was erratic. The president, who has long criticized the 70-year-old alliance, at times this week cast himself as its defender, while at other moments chastised allies for, in his view, taking advantage of the United States.

Inside a closed-door session, Trump read a prepared statement to his fellow leaders listing off grievances about defense spending. But he did not threaten other countries in the same way he had done in previous NATO meetings, according to five NATO diplomats and policymakers who were either inside the room or listened to the conversation from a separate chamber.

"There were no threats. It wasn't like last time," said one policymaker, who, like others, spoke on condition of anonymity to discuss the closed-door meeting. Trump "always prefers to have a tough image, but he fell in with the general effort to portray what's happening as a success," the official added.

Trump told fellow leaders that "if trade imbalances were taken into account, then the United States would be spending 90 percent of NATO's defense," according to the official.

The fact that most of the leaders, including Trump simply read off their prepared statements rather than engaging in angry back-and-forth was a sign of a calmer summit than previous encounters, such as last year's gathering in Brussels, several of the officials said.

Another leader, pushing back gently at Trump by trying to demonstrate the importance of defending Europe, pointed out that if Russia took over Western Europe, the size of its collective economy would swell larger than that of the United States, one official said.

Macron, too, was softer inside the meeting than outside of it, and did not repeat his widely-publicized comments about NATO suffering from "brain death."

"My words have now been dealt with," Macron told reporters at the end of the summit.

The French president took issue with Trump's nearly single-minded focus on defense spending. "Up until now, we have been talking about burden sharing," Macron said. "There was no discussion of geopolitical strategy." Now, he added, there would be.

NATO Secretary General Jens Stoltenberg trumpeted what he said was a successful NATO meeting. He argued that the disagreements among some leaders were not a challenge to NATO's fundamental "all for one, one for all" mission.

"Disagreements will always attract more attention than when we agree," Stoltenberg told reporters. "The strength of NATO is that we have always been able to overcome these differences and then unite around our core task to protect and defend each other."

Leaders approved a long list of initiatives at the meeting, leaving policymakers delighted that, in the end, the summit ended almost normally. They decided to expand their defense planning into outer space. They discussed how to address new challenges from China. They promised to keep their cellular networks secure.

To accentuate his beef over defense spending, Trump ate lunch here Wednesday with the leaders of the eight other NATO member nations that are meeting alliance spending guidelines of 2 percent of gross domestic product.

"This is on me," Trump told his counterparts from Estonia, Latvia, Romania and other so-called "2 percenters," as he opened the lunch conversation.

Trump met privately with Turkey's Erdogan on the summit sidelines for what one official said was nearly half an hour. Unlike Trump's other such meetings, his visit with Erdogan was not on his public schedule and journalists were not permitted to cover it. After the Turkish government shared a photograph of the tete-a-tete on social media, a White House spokesman confirmed that the two presidents had met. They discussed trade, energy and regional security challenges, according to the White House.

Trump also met one-on-one with German Chancellor Angela Merkel, who has clashed with him in the past. Germany says it will meet the spending goals only in 2030, six years later than it agreed in 2014.

On Tuesday, Trump called Germany "delinquent" and has been threatening to retaliate against the country with a trade war. Sitting across from Merkel on Wednesday, Trump brought up trade, saying, "We've had a very bad imbalance for many, many years - for decades, actually - and we're discussing that right now."

While in London, Trump found that the summit's host, Johnson, avoided public contact with him. Johnson faces an election on Dec. 12, and with Trump deeply unpopular in Britain, too much face time between the two populists could be politically toxic. But the two men had what Trump characterized as an enjoyable conversation on Tuesday evening.

Johnson tried to brush off a question Wednesday morning about avoiding photos with Trump, declaring that "I'm going to be photographed with every possible leader of NATO. We're having a very successful meeting."

Johnson similarly dodged a question about what mocking Trump along with Trudeau and Macron in the viral video, telling reporters, "That's complete nonsense. I don't know where that's come from."

Trump, meanwhile, seemed to toggle between feeling delighted about mocking his perceived foes to wounded over himself becoming the subject of mockery.

Trump was also caught on an open microphone musing about the media's likely reaction to his decision to cancel his news conference - a real-time acknowledgment that he suspected his hasty departure would be portrayed as a presidential tantrum.

The Washington Post's James McAuley in Paris and Allyson Chiu and Katie Mettler in Washington contributed to this report.

(Except for the headline, this story has not been edited by NDTV staff and is published from a syndicated feed.)
Comments
Donald TrumpJustin Trudeau

US judge Calls Trump A "Frankenstein's Monster" For Pennsylvania Lawsuit