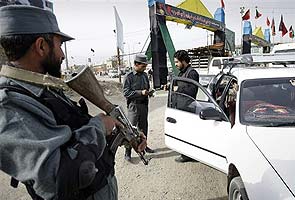 An Afghan policeman stands guard, left, as a police officers inspects the documents of a car at a checkpoint during an Ashoura commemoration in Kabul. Credit: The Associated Press

Kabul: A suicide car bomber killed two people and wounded 40 others, including women and children, in an attack on Friday in Wardak province west of Kabul, police said.

Promoted
Listen to the latest songs, only on JioSaavn.com
"The explosion took place near a police centre in Maidan Shar," the provincial capital, police spokesman Abdul Wali told AFP. "As a result two civilians were killed and 40 others were injured."