"He Raped Me": Actress Testifies In Court In Harvey Weinstein Trial

In emotional testimony at Harvey Weinstein's trial, the actress described him barging into her New York apartment late at night in the early 1990s and attacking her while she was wearing a nightgown. 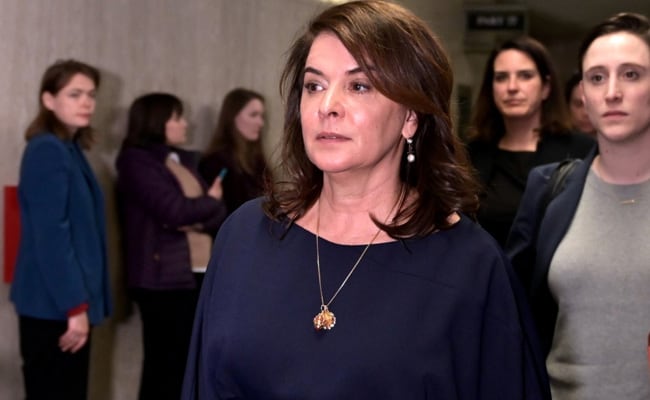 More than 80 women, including Angelina Jolie, have accused Harvey Weinstein of sexual misconduct.

"The Sopranos" actress Annabella Sciorra fought back tears as she told a court Thursday that being raped by Harvey Weinstein left her feeling like she was having "a seizure" and caused her to self-harm.

In emotional testimony at Weinstein's trial, Sciorra described him barging into her New York apartment late at night in the early 1990s and attacking her while she was wearing a nightgown.

"It was just so disgusting that my body started to shake in a way that was very unusual. I didn't really even know what was happening," the 59-year-old said.

Sciorra faced the jury as she held her hands above her head and clasped her wrists to demonstrate how Weinstein, then three times her weight, held her down on her bed and sexually assaulted her.

"He got on top of me and he raped me," she said, under questioning by lead prosecutor Joan Illuzzi-Orbon.

"He put his penis inside of my vagina and he raped me," repeated Sciorra, the first of Weinstein's accusers to testify in proceedings symbolic to the #MeToo movement.

Weinstein, 67, avoided eye contact as Sciorra told the New York state court that the former film producer then performed oral sex on her.

"I didn't have very much fight left inside me at this point. My body just shut down," said Sciorra, wearing a navy blue dress with long sleeves.

Sciorra, best known for her role as Gloria Trillo in American mob drama "The Sopranos," gave evidence to support the prosecution's case that Weinstein was a career sexual predator.

Her allegation is too old to be included on the charge sheet, but the charge of predatory sexual assault, which carries possible life imprisonment, requires prosecutors to prove he sexually assaulted at least two people.

Sciorra said the alleged attack occurred in the plush Manhattan neighborhood of Gramercy Park in the winter of 1993-94 after Weinstein dropped her off at home following a business dinner at a restaurant.

It left her traumatized and withdrawn and she started drinking heavily and began cutting herself afterwards, Sciorra testified.

"I would have blood on my fingers and my hands," she recounted.

Sciorra said she did not go public with the allegations until The New Yorker magazine published her account in October 2017 because she was "afraid for her life."

She told Weinstein's trial she never contacted police because she was confused that the alleged incident had been perpetrated by someone she knew.

"I would say I felt at the time that rape was something that happened in a back alleyway in a dark place by somebody you didn't know," she said.

Sciorra added that when she later confronted Weinstein about the incident he became angry and threatening.

She tried to avoid him out of fear but he would track her down, including to a hotel room at the 1997 Cannes Film Festival, she testified.

"When I opened the door, the defendant was in his underwear with a bottle of baby oil in one hand and a videotape in the other," Sciorra said.

She also questioned Sciorra as to why she did not tell friends or her building's doorman about it afterwards.

"At the time, I didn't understand that that was rape," said Sciorra.

Rotunno also accused Sciorra of providing inconsistent information about the exact location of the apartment.

The attorney played a clip from a 1997 interview in which Sciorra told host David Letterman she admitted to sometimes lying to journalists to protect her private life.

"As part of that job Ms. Sciorra, you pretend to be someone you're not. Is that fair to say?"

Over 80 women, including Angelina Jolie, have accused Weinstein of sexual misconduct but the trial, scheduled to run into March, relates to just two.