About 50 mummies discovered in Egypt's Valley of the Kings 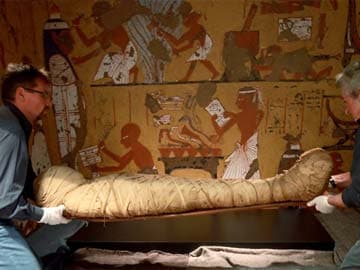 Two employees of the Egyptian Museum of Florence carry a circa 2000 year old mummy of an Egypitian woman.

Cairo, Egypt: Remains of about 50 mummies, including newborn babies, thought to belong to the 18th Pharaonic dynasty were found in a huge tomb in Egypt's Valley of the Kings in Luxor, Antiquities Minister Mohamed Ibrahim said on Monday.

Wooden coffins and death masks were found beside the bodies, probably dating from the New Kingdom, state news agency MENA quoted Ibrahim as saying, referring to Egypt's 18th, 19th and 20th dynasties between about 1567 and 1085 BC.

According to initial studies of the find, princes and princesses were among the bodies found in the tomb, which had been raided in previous eras, MENA reported.

The discovery was made by a Swiss team from the University of Basel working with the Egyptian government.

Antiquities are vital to Egypt's tourist trade but, beset by insecurity and political chaos in the three years since the Arab Spring, the country has failed to secure ancient sites and stop theft from museums, mosques, stores and illegal excavations.