The remains of Lady Lex would stay on the floor of the Coral Sea for the next 76 years - until they were found by a billionaire who spends some of his fortune recovering the lost wreckage of previous wars. 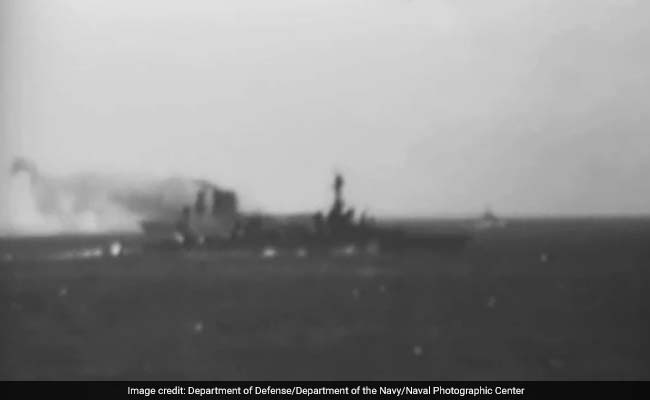 The aircraft carrier Lady Lex sank into the Coral Sea on May 8, 1942 during World War 2.

Washington: The first torpedo hit the USS Lexington's port side at about 11 a.m. on the last day of the Battle of the Coral Sea, a critical point in the United States' war against Japan. Within minutes, another torpedo landed, followed by three bombs from Japanese dive bombers.

Fires raged, but they were under control two hours later. Still, the consecutive hits from the Japanese navy would eventually spell the end for the aircraft carrier known as Lady Lex. Fuel tanks from underneath were ruptured, causing an explosion that shook the warship. Capt. Frederick C. Sherman ordered his men up to the flight deck.

Men jumped into the warm water and were immediately rescued by nearby cruisers and destroyers. Sherman and his executive officer, Cmdr. M.T. Seligman, were the last ones to leave before Lady Lex sank into the Coral Sea on May 8, 1942, the end of the four-day naval battle between Allied forces from the United States and Australia, and the Imperial Japanese Navy. A little more than 200 crew members died - part of the price the United States paid to help protect its ally, Australia, from Japan during World War II.

About 2,770 survived, including Wags, the captain's dog.

The remains of Lady Lex would stay on the floor of the Coral Sea for the next 76 years - until they were found by a billionaire who spends some of his fortune recovering the lost wreckage of previous wars. Microsoft co-founder Paul Allen on Monday announced the discovery of the USS Lexington about 500 miles off the eastern coast of Australia, two miles below the surface of the Coral Sea.

"To pay tribute to the USS Lexington and the brave men that served on her is an honor," Allen said. "As Americans, all of us owe a debt of gratitude to everyone who served and who continue to serve our country for their courage, persistence and sacrifice."

Allen, a Seattle-based entrepreneur and philanthropist who also invests in environmental causes, had bought a 250-foot research vessel called R/V Petrel and retrofitted it with state-of-the-art equipment capable of diving 3 1/2 miles, according to his website. Allen has used the vessel in expeditions that led to the discovery of several historic warships and artifacts.

The USS Indianapolis was recovered from the bottom of the Philippine Sea in August, more than 70 years after a Japanese submarine fired six torpedoes toward the 610-foot heavy cruiser, dividing it in pieces. About 800 of the nearly 1,200 crew members made it off the ship before it sank, but many died of dehydration and starvation as they floated helplessly in shark-infested waters for four days.

Last year, President Donald Trump paid tribute to the veterans who served during the Battle of the Coral Sea, which the Department of Defense describes as a "crucial turning point in the war against Imperial Japan in the Pacific."

"In those Pacific waters, we forged iron bonds between our countries. Few peoples in the world share ties in history, affection and culture like the Americans and Australians. Those ties are sealed with the blood of our grandfathers and fathers and those same ties are now the priceless heritage we celebrate so beautifully tonight," Trump said during the May speech.

The Battle of the Coral Sea, which lasted from May 4 to May 8, 1942, came at an unsettling time for the United States, Australia and their allies. Allied forces had been experiencing mounting defeats, while the Japanese military had been continually succeeding, beginning with the attack on Pearl Harbor months earlier. In Australia, people had begun to expect an imminent invasion by Japan.

By April 1942, Australia had become a target for the Japanese. Leaders of Japan's navy had begun devising ways to capture Port Moresby and the islands of Tulagi, New Caledonia, Fiji and Samoa - located east and northeast of Australia - partly to cut off communications with the United States and leave it vulnerable to Japanese invasion.

Occupying Papua New Guinea's Port Moresby, known as Operation MO, would "provide the Imperial Japanese Navy with a secure operating base on Australia's northern doorstep," according to the Royal Australian Navy. The planning dragged on until the middle of April, when American bombers attacked Japanese home islands. The attacks, though minimal, gave Operation MO a renewed sense of urgency.

The military forces behind Operation MO included an armada of destroyers, cruisers, aircraft carriers and submarines. The U.S. Navy had received signal intelligence on Japan's intentions, but that "was barely enough advantage for the fleet to take on and force the Japanese to retreat," according to the Department of Defense.

Japan managed to capture Tulagi, which is part of the Solomon Islands east of Papua New Guinea, on May 3. The Battle of the Coral Sea raged for the next four days. In the end, both the Japanese and the Allies portrayed themselves as victors, though both sides suffered severe losses.

"In a sense they are both right," according to the Royal Australian Navy.

The Americans lost more ships than the Japanese. But the Allies prevented Japan from capturing Port Moresby - its main objective. By the time the USS Lexington was sunk on May 8, Japanese forces were not in a position to keep advancing. Their aircraft carrier Shoho had been sunk. A second carrier, Shokaku, had been severely damaged, while a third, Zuikaku, was low on fuel. Adm. Shigeyoshi Inouye, leader of Operation MO, decided to postpone the invasion of Port Moresby.

Many say that if it were not for the damage the Japanese forces suffered, the Americans would not have defeated them in the next battle a month later. The Battle of the Midway, which raged from June 4 to June 7, 1942, resulted in the deaths of about 360 American men - compared with more than 3,000 Japanese casualties.

Promoted
Listen to the latest songs, only on JioSaavn.com
Historians Jonathan B. Parshall and Anthony P. Tully described the American assault on the Japanese fleet as "the single most decisive aerial attack in naval history." The Battle of the Midway - arguably because of the Battle of the Coral Sea - helped turn the tide of war in the Pacific theater.