Reggie Fields was not just getting a lesson in summer business economics; he was also being schooled in the 21st century phenomenon known as #LivingWhileBlack. 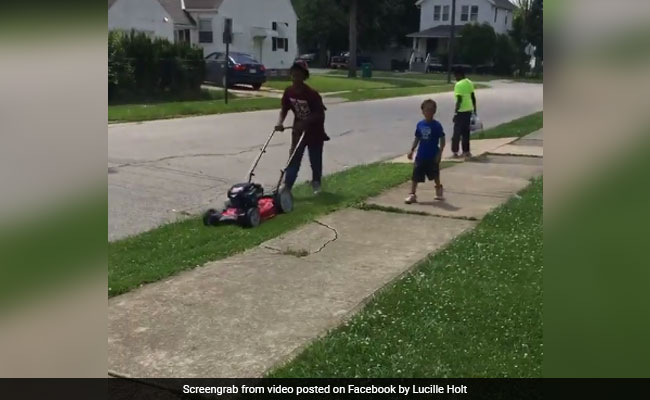 Reggie and his troupe were finishing up Lucille Holt-Colden's yard when the police was called.

It's a business that has existed for as long as there have been summer vacations and borrowed lawn mowers: A pint-size entrepreneur offers to endure the rage of a summer sun on a neighbor's behalf, pushing a lawn mower across high grass for a small fee.

Last week, in Maple Heights, Ohio, that entrepreneur was Reggie Fields, a 12-year-old middle schooler who is the owner and mower-in-chief of Mr. Reggie's Lawn Service. His sister and two cousins also provided manual labor in their neighborhood outside Cleveland, working a rake and a broom to corral clippings.

That's what they told Lucille Holt-Colden, 51, who encountered them at a Dollar Tree where they were purchasing a gas canister and some lawn bags on June 23. Holt-Colden thought it was a good investment. Her grass was growing taller, and her $20 would be used to keep this particular group of black youths off the street and out of trouble.

She was mostly right.

As Reggie and his troupe were finishing up her yard, a Maple Heights Police SUV rolled up in front of Holt-Colden's house.

When she saw the police through the window, she was surprised. Then, when she learned what had happened, she was outraged - and reached for her cellphone to share it with the world.

"My neighbors that stay in that house right there," she said, swiveling the phone as it recorded her on video. "So I guess I have a line where part of it is not my yard. They called the police to tell the police that the kids was cutting their grass. Who does that? Who does that?"

She captioned the video: "This is RIDICULOUS!!!" a phrase she repeated several times during an interview with The Washington Post, along with "Who does this?"

Reggie, it seemed, was not just getting a lesson in summer business economics; he was also being schooled in the 21st century phenomenon known as #LivingWhileBlack.

Recently, African Americans who were engaged in laughably innocuous activities have been viewed through criminal-tinted glasses - and suddenly found themselves making explanations to police officers and security guards about completely lawful activities.

Someone called the police on a black man who was reading a book about Christianity while watching the ocean. Black people have had the authorities sicced on them while going to the gym, shopping for underwear, waiting for the school bus and couponing.

Reggie isn't even the youngest #LivingWhileBlack victim. A few weeks ago, an 8-year-old selling cold water to passersby to help fund a trip to Disneyland was approached by a white woman who pretended to call the police on her. In 2012, police were summoned to an elementary school in Georgia where they handcuffed a 6-year-old kindergarten student - for throwing a temper tantrum.

"If the kids were white," Holt-Colden said of Reggie and his family members, "they would not have called." She told The Washington Post that neighbors of various races live in the neighborhood but "I don't have any problems with any other neighbors."

When the police came, Holt-Colden said, Reggie's 9-year-old cousin was frozen with fear in her driveway, worried that he was in trouble.

But Reggie kept mowing. The children were not cited or stopped by the police in any way.

Still, Holt-Colden said she was upset that a lawman responded in the first place.

The Cleveland area has recently been shaken by the death of Saniyah Nicholson, a 9-year-old killed in the crossfire during a shooting in the eastern part of the city. Her death raised concerns about the idle time of thousands of students out of school for the summer, Holt-Colden said.

Saniyah was sitting outside a boxing club in east Cleveland, according to the city's Fox-affiliate, WJW-TV, when two rival groups started firing at each other. The bullets missed the older men, but struck the little girl sitting in her mother's car. Her family planned to bury her on Saturday.

Holt-Colden said she wants more people to do what they can to keep children occupied with meaningful tasks. She worried that Reggie's interaction with the police would be discouraging.

Many others chipped in to prevent that from happening.

"People are inboxing me like, 'How can I get in touch with these children?' 'Where are they at?' 'I got property I want these kids to cut,'" Holt said.

She started a GoFundMe for Reggie. By Saturday afternoon, people had donated more than $8,600, the equivalent of more than 430 lawns.

But Reggie and his crew aren't resting on that publicity-fueled windfall. Some people donated supplies - a leaf blower and a lawn mower - to help his business. And he's still out mowing lawns.

He's even made fliers on orange paper with an image of a lawn mower: "Mr. Reggie Lawn Cutting Service. Taking it one step at a time. Schedule an appointment I'll be on time . . ."