A tortured choice in famine: Which child lives? 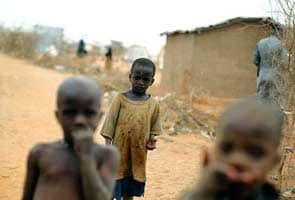 Daddab, Kenya: Wardo Mohamud Yusuf walked for two weeks with her 1-year-old daughter on her back and her 4-year-old son at her side to flee Somalia's drought and famine. When the boy collapsed near the end of the journey, she poured some of the little water she had on his head to cool him, but he was unconscious and could not drink.

She asked other families traveling with them for help, but none stopped, fearful for their own survival.

Then the 29-year-old mother had to make a choice that no parent should have to make.

"Finally, I decided to leave him behind to his God on the road," Yusuf said days later in an interview at a teeming refugee camp in Dadaab, Kenya. "I am sure that he was alive, and that is my heartbreak."

Parents fleeing the devastating famine on foot - sometimes with as many as seven children in tow - are having to make unimaginably cruel choices: Which children have the best chance to survive when food and water run low? Who should be left behind?

"I have never faced such a dilemma in my life," Yusuf said. "Now I'm reliving the pain of abandoning my child. I wake up at night to think about him. I feel terrified whenever I see a son of his age."

"It is a normal reaction to an abnormal situation. They can't sit down and wait to die together," he said. "But after a month, they will suffer post-traumatic stress disorder, which means they will have flashbacks and nightmares.

"The picture of the children they abandoned behind will come back to them and haunt them," he said. "They will also have poor sleep and social problems."

The United States estimates that more than 29,000 Somali children under age 5 have died in the famine in the last three months. An unknown number too weak to walk farther have been abandoned on the sandy trek to help after food and water supplies ran out.

Faduma Sakow Abdullahi, a 29-year-old widow, attempted the journey to Dadaab with her baby and other children ages 5, 4, 3 and 2. A day before she reached the refugee camp, her 4-year-old daughter and 5-year-old son wouldn't wake up after a brief rest.

Abdullahi said she did not want to "waste" the little water she had in a 5-liter container on dying children when the little ones needed it.

Nor did she want to wait for too long until her other children started dying, so she stood up and walked away a few paces - then returned in the hopes the youngsters were in fact alive.

After several back-and-forth walks, she finally left her two children under a tree, unsure whether they could be resuscitated.

More than 12 million people in East Africa are in need of food aid because of the severe drought. The U.N. says 2.8 million of those are in need of immediate lifesaving assistance, including more than 450,000 in Somalia's famine zones.

Ahmed Jafar Nur, a 50-year-old father of seven, was traveling with his 14-year-old son and 13-year-old daughter to Kenya. But after only two days of walking, they ran out of water. By the third day, they could only sit beneath a big tree - thirsty, hungry and exhausted.

"The two children could not walk on anymore. Then instead of us all dying there, I was forced to leave them to their fate, especially after I thought of the other five children and their mother I left behind at home. I said to myself, 'Save your life for the interest of the five others. These two have their God,'" he said.

"That was the worst thing I experienced in my life. It was a heartbreaking experience to abandon my children who are part of me," he said. "For almost three months, my mind was not stable. Their images were in front of me."

Miraculously, the two teenagers were saved by nomads, and they have since made their way back to their mother in Somalia. But Nur said he can't afford to bring the rest of his family to Kenya because it cost too much.

"I was a farmer and had no education that can help me now get jobs. We depend on handouts," he said. "My mind is preoccupied with them: Will they all die, including their mother, or will some survive? That is what I always ask myself."

When Faqid Nur Elmi's 3-year-old son died of hunger and thirst on the road from Somalia, his mother could only surround his body with small dried branches to serve as a grave. She couldn't stop to mourn - there were five other children to think about.

Promoted
Listen to the latest songs, only on JioSaavn.com
"Where will I get the energy to dig up a grave for him?" she asked. "I was just thinking of how I can save the rest of the children. The God who gave me him in the first place took him away. So I didn't worry much about the late son. Others' lives were at risk.