A Tale Of Two Cities In Aleppo: Rubble On One Side, Packed Restaurants On The Other 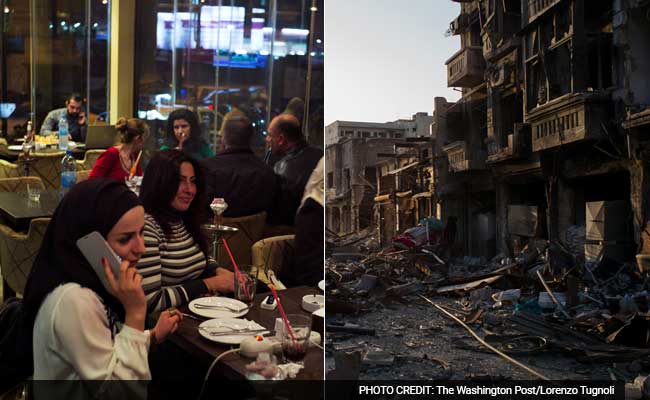 Part of the city is in ruins, other areas are bustling with people.

ALEPPO, Syria: Five years of conflict have torn Syria apart. And nowhere is that more stark than in its most populous city, Aleppo, where front lines carve through neighborhoods and slice it in two.

It is a city of sharply contrasting halves, and one side clearly appears to have the upper hand.

In a park on the government-held side, families picnic while children line up to buy balloons and popcorn. A few miles away, on a sprawling university campus, thousands of students attend class. Downtown, the city's cinema plays the latest Hollywood films. In the evenings, the restaurants fill.

War brings death and discomfort, but life continues here with a surprising degree of normality.

It's a far cry from the images of Aleppo the world has seen during Syria's war: the rubble-filled streets, the carcasses of buildings, lifeless bodies being dragged out of piles of detritus after airstrikes. But that is the rebel-held side.

There, the mishmash of armed groups in control are almost entirely encircled and were brutally bombarded before a recent cease-fire brought some relief. Sitting right on the battle lines, the old city of Aleppo is in tatters. The 13th-century citadel that rises above its now scorched markets with their famed vaulted ceilings is a Syrian army base.

Pro-government forces, meanwhile, are advancing around the city, which had a prewar population approaching 3 million. They have been bolstered by recent Russian airstrikes that have allowed them to take the initiative and are pushing outward to secure the single road that serves as the lifeline for the government held-side - the only way in or out.

Getting there required official permission, and reporters are accompanied by government minders. Access is restricted to government-held areas, providing a limited view of life here. In addition to the bureaucratic hurdles are the practical ones, with the road sometimes cut because of attacks.

The drive from Damascus, the Syrian capital, to Aleppo on a trip this month necessitated a circuitous route, veering out east toward Raqqa to avoid rebel-held areas on the main highway. What was once a four-hour journey took double that.

Near the town of Khanaser, 30 miles southeast of Aleppo, the al-Qaeda affiliate Jabhat al-Nusra controls ground on one side of the road - the Islamic State, the other. Last month, three truck bombs attacked a checkpoint here. Both groups advanced from the surrounding hills, soldiers said.

But over the past year, the road has largely been open, and residents of government-held Aleppo say living conditions are improving.

After more than three months without water, the supply was reconnected to most areas this month. There is still no electricity, with power only available through generators.

At the park, the dull thud of explosions in the distance and the groups of men in military uniforms are among the few clues to the devastation that is so near.

The war in Syria has a sectarian tone, as a largely Sunni insurgency fights President Bashar al-Assad's Alawite regime, backed by Shiite forces from Lebanon, Iraq and Iran. But rifts also fall along lines of class and clan. In Aleppo, a majority Sunni city and the powerhouse of Syria's industry, many of the wealthier neighborhoods in the west stood with the regime, as rebels swept in to control poorer areas.

In Foresta cafe in the city's well-to-do al-Azizia neighborhood, David Guetta's "No Money No Love" blasts out as 25-year-old Hadeel Kasabji enjoys an evening with her family. She said the lack of electricity is a struggle.

"Now we have to think about these things, the necessities of life," she said.

Farther down the road, at the al-Zahraa cinema, 50 people file out of a screening of "London Has Fallen," an action film starring Gerard Butler and Morgan Freeman about a terrorist attack that leaves the British capital in ruins.

"It's difficult to live here," Rafi Balaban, 31, said as he left the screening. "It's not a normal life." His wife, Noror, said she has tried to persuade him to leave, like the many who have emigrated for new lives in Europe and elsewhere in the region.

The Syrian uprising was late to reach Aleppo, and for the first year of the rebellion, it was largely immune from the protests and violence that erupted elsewhere. When large-scale demonstrations reached the city's university four years ago, there was a crackdown and mass arrests.

Now Kamal Khoudary, the university's vice president, dismisses the unrest as the work of students supporting "terrorist groups." He said troublemakers left of their own volition.

Today, campus life continues, under the ever-present stare of portraits of Assad.

The number of students has shrunk from 160,000 before the war to 120,000 today, Khoudary said. Some still come from abroad to study, from Sudan, Chad, Lebanon and Iraq, he said.

The university has seen its share of violence in the past few years. There have been car bombs in the square outside and a rocket attack on campus. A month ago, a mortar hit student housing, where 35,000 displaced Syrians from the area live, killing a woman and her child.

It fell in the room next to Samira Hamid's. The 50-year-old is from the Sukkari neighborhood, on the rebel-held side of the city - officials say half a million Syrians have sought refuge on the government side of town.

Hamid came with 13 members of her extended family.

"I always think about my home," she said. "I'm so tired. Somebody told me my house was destroyed completely, but I don't know."
She strokes a cat she has taken in, a replacement for the family pet she had to leave behind.

Nearby, a school supported by the United Nations serves displaced children in two shifts. A clinic also for the displaced appears well stocked, though the government has been accused of obstructing efforts to get international aid to rebel-held areas.

"Most medicines we can get," said Mehdi Aktaa, who works at the clinic. Aleppo is famed for its pharmaceutical trade, and many of the supplies here are still made locally, even though most of the factories now lie behind rebel lines.

As with other essential industries, murky agreements between the government and rebels keep the factories running.

"The terrorist groups take a tax or fee for transferring the medicines here," Aktaa said. It is just one part of an inevitable ebb and flow between rebel and Islamic State areas and government-held Aleppo.

The city's bus station is a crossroads in the war. Buses leave for Islamic State-held al-Bab and rebel-held al-Shaar. Many passengers are too afraid to speak.

Some are government employees who continue to be paid despite living in opposition-held areas. They travel every month to collect their salaries before returning.

Brig. Gen. Sami Shiha, a retired army general from Aleppo, thinks that negotiations rather than a military offensive will be the end for the battered rebels in the city.

"In the past few weeks, we've sent strong messages to all these terrorist groups to lay down their guns and enter reconciliation," he said. "We also send the invitation to these groups to turn to fight [the Islamic State]."

Sheikh Sharif Martini, a tribal leader from Aleppo who has been involved in negotiations, said that although Jabhat al-Nusra and the Islamic State should be fought, other groups have started opening up to talks.

"All this can be solved with money," he said.

The wide boulevards in the center of government-held Aleppo show little sign of war. But nearer the fighting, a cease-fire brokered by Moscow and Washington has brought some respite from mortars and other projectiles launched across the front lines. Improvised bombs made from cooking gas containers had caused destruction.

Hagop Tchouroukian, an Armenian shopkeeper, lost his home when a homemade bomb struck two years ago, killing a woman and two children in his building in the Midan neighborhood. He has moved elsewhere but returns to the area every day to work in his shop.

His 4-year-old twins play in the street, something that would not have been possible before the cease-fire, he said. Before the truce, two or three mortar shells fell every day. Now there have just been one or two in the past two weeks, he said.

But the cease-fire is not without its violations. Just a mile north from where the children play, rebels are attacking the Kurdish neighborhood of Sheikh Maqsoud. Meanwhile, two miles south, a government airstrike killed at least five people in Salhin.

Susan al-Allawi, 19, a university student, said she often thinks of what is happening on the other side of the lines. Her family is from rebel-held al-Shaar but fled four years ago. Her former neighbors said the family's house is still standing, but the situation is desperate.

"It's a thousand times better here, you can't even compare it," she said.