A homeless man soon found the gun in the bathroom stall and fired it, police said. 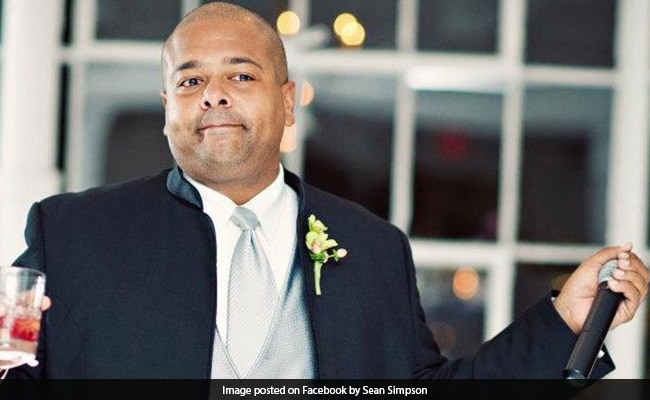 Simpson was arrested Sunday and charged with unsafe storage of a firearm, police said.

A Parkland chemistry teacher who said he was open to the idea of arming himself after the mass shooting at the high school has been arrested after he left a loaded gun in a public bathroom, police said.

Sean Simpson, 43, told police he had removed his personally owned firearm while using the restroom Sunday at the Deerfield Beach International Fishing Pier, about 13 miles east of Marjory Stoneman Douglas High School where he teaches during the week.

Simpson placed the gun on the handrail of the bathroom stall, then left it behind as he went to wash his hands at a sink inside the stall, according to a Broward County Sheriff's Office arrest report.

"The sink would not work," the report stated. "He then exited the bathroom stall and washed his hands in the main bathroom sink - then [exited] the bathroom. At this time the gun was still left in the stall."

Less than five minutes later, Simpson remembered his firearm was in the bathroom; while he was walking back to get it, he heard a single gunshot, police said.

In the restroom, Simpson found another man holding his gun and snatched it from him, police said.

Simpson was arrested Sunday and charged with unsafe storage of a firearm, police said. His firearm, a Glock 43 9mm pistol, had seven rounds loaded in it, police said.

An arrest affidavit for Simpson noted that the public pier was frequented by families and children, especially on a weekend.

Police also arrested Joseph Spataro, identified as a homeless man, for trespassing and firing a weapon in public.

The bullet he fired had struck a wall, and a shell casing was later found in the corner of the bathroom stall, police said.

Spataro had "knowingly discharged the firearm in the bathroom to check to see if the firearm was loaded," his arrest report said.

The tragedy seemed to galvanize a new generation of activists, including many teenagers from Parkland, in support of stricter gun control. Hundreds of thousands of protesters appeared at March for Our Lives rallies across the country March 24 to call for an end to gun violence.

On the other end of the spectrum, in the weeks after the Florida tragedy, President Donald Trump and others pushed a proposal to arm schoolteachers.

A week after the shooting, Simpson, who said he had been teaching at Marjory Stoneman Douglas for 14 years, gave a lengthy interview to MSNBC vouching for Parkland student activists who had been attacked by right-wing conspiracy theorists after the shooting.

"They picked the wrong school to do this because these students are going to stand up," Simpson said. " They're going to speak from their hearts, and they're not going to be targeted."

In that same interview, Simpson cautiously told MSNBC he would be open to the idea of undergoing training to carry a weapon at school - but that he would prefer to see restrictions on assault-style weapons.

"I don't know if [arming teachers is] the answer, but I know there are some of us that are willing to take the training if it was offered and probably be another line of defense - but again, that is a complicated subject and I'm not sure if it is the answer," Simpson said then. "I think it's easier to get these type of weapons out of the hands of people that aren't meant to do anything but kill. They're not meant for hunting and my personal opinion is, if you need 30 rounds to hunt something, you should find another hobby."

On Tuesday, the Broward School Board voted unanimously to reject a plan to arm staff at the district's schools, including at Marjory Stoneman Douglas High School, under a $67 million program recently approved by the Florida Legislature to train and arm school staff members statewide.

Under the new Coach Aaron Feis Guardian Program, named after a Parkland football coach who died in the Feb. 14 shooting, some school staff members in Florida would be allowed to carry concealed weapons.

Promoted
Listen to the latest songs, only on JioSaavn.com
Broward School Board members instead wanted the state to put money toward hiring more school resource officers, the Miami Herald reported.

"To leave $67 million on the table is just a travesty," school board member Robin Bartleman said, according to the Herald. "We should definitely launch a campaign to persuade the governor - for those districts who don't want to arm their employees, that they give us the money to keep our children safe in other ways, as opposed to leaving it there."