A New Generation of Polish Affluence: Ferraris And The Cosmopolitan Tower

Decades on, a new class of wealthy Poles has appeared, whose members include heads of successful family businesses, real estate agents and high-flying bankers. 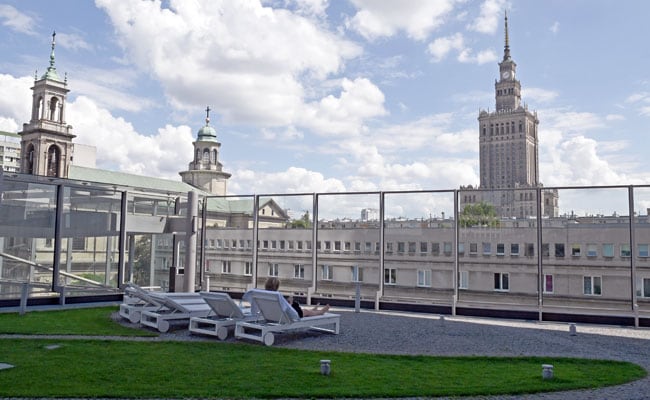 A grey Ferrari comes to a halt in Warsaw and a young woman emerges. Wearing Chanel sunglasses and carrying a little dog, she enters the Raffles Europejski hotel, a symbol of the luxury that has returned to Poland.

Her destination is the historic pastry shop Lourse, which is located at the hotel, where guests pay between 250 and 4,000 euros ($290 and $4,700) a night and can count on perks like a personal butler.

The legendary Hotel Europejski, which was considered eastern Europe's best in the 19th century, has just reopened after five years of renovation work spearheaded by the Raffles brand.

Poland's first Hermes store could be housed at the site, a source told AFP, though the French luxury goods giant would only confirm that it was looking into a project "in Warsaw in late 2019, early 2020".

Luxury has become increasingly visible in Poland after a long absence due to the country's devastating losses during World War II and the policy of egalitarianism later touted by the communist regime.

Decades on, a new class of wealthy Poles has appeared, whose members include heads of successful family businesses, real estate agents and high-flying bankers.

Many of the elite live in the 44-floor Cosmopolitan apartment tower in the heart of Warsaw. Opened in 2014, the building boasts a minimalist design by German-American architect Helmut Jahn, who also designed the European Union's headquarters in Brussels.

Of the 100 most expensive real-estate sales in Warsaw between 2015 and 2017, 79 concerned flats in the Cosmopolitan building, said Karolina Kaim, president of Tacit Investment, the Polish firm that financed the building's construction.

The apartments vary in price depending on the floor and view.

The most sought after units look out onto the Vistula River and the old part of town and cost nearly 10,000 euros per square metre -- a figure that may not shock Parisians or Londoners but is staggering to the average Pole who earns around 1,100 euros a month.

Most of the apartment owners are Polish but there are also a handful of foreigners living in the "vertical village", which cost more than 100 million euros to build, according to Kaim.

Other luxury symbols seen around town include high-end cars from brands such as Bentley, Ferrari, Lamborghini and Rolls-Royce.

Only a few years ago, the appearance of a sports car with the famous horse logo would have drawn a small crowd of onlookers, but today, Ferraris no longer stop traffic in Warsaw.

The Italian luxury car manufacturer has two Polish dealerships, one in the southern city of Katowice and another in the capital.

Their marketing head Karolina Szulecka prefers not to reveal sales figures but says that client interest is constantly on the rise.

Were it not for the company's policy of limiting production, Poles would snap up "10 or 15 percent more" Ferraris, she told AFP.

From the collapse of communism, a new social group of entrepreneurs rapidly emerged, often former managers quick to buy shares in the newly privatised companies and develop them, or small entrepreneurs and artisans who swiftly adapted to the new conditions to create or grow a family business.

EU funds and foreign investment into the country followed and increased after Poland's 2004 EU entry.

Between 1990 and 2015, gross domestic product (GDP) more than doubled. Exports are growing and, according to International Monetary Fund forecasts, growth is expected to be just over four percent this year partly on "strong domestic consumption".

Today, Poland's wealthiest are often the third generation of those small business owners.

Meanwhile some Poles have many more than just one sports car.

A land developer, who declined to be identified, admitted he had three Ferraris parked in his garage, while the brand's biggest collector in Poland has 12. He also prefers to remain anonymous.

The general manager of the Bentley and Lamborghini dealerships in Poland, Piotr Jedrach, expects to sell around 50 British limousines in 2018 -- an increase on previous years thanks in part to the recent addition of an SUV model.

As for Lamborghinis, displayed in Warsaw in a car dealership that looks more like a futuristic temple, they too are forecast to see a boost in sales, with 60 expected to sell in 2019, thanks to the SUV Urus.

The average Pole has nothing against the ultra wealthy.

"If I had that much money, I'd also buy myself a Ferrari," said Hanna Mrowiec, a retired middle manager who lives in a small one-bedroom apartment.

"But to have three? That's absurd. You can't drive three Ferraris at once," she told AFP.

The Swiss owner of Raffles Europejski, Vera Michalski, paid for around 500 modern Polish works of art to adorn her hotel. She also lent some from her own collection.

As for the Cosmopolitan, there was an art exhibition earlier this year on the 42nd floor.

It featured work by the late painter and sculptor Wojciech Fangor, the only Pole to ever have a solo exhibition at the Guggenheim Museum in New York.

The Cosmopolitan exhibition was free for anyone to attend -- not just the happy few living there.

(Except for the headline, this story has not been edited by NDTV staff and is published from a syndicated feed.)
Comments
FerrariCosmopolitan Tower in WarsawPolish affluence