'A Great Will to Live': How One Man Survived an Islamic State Massacre 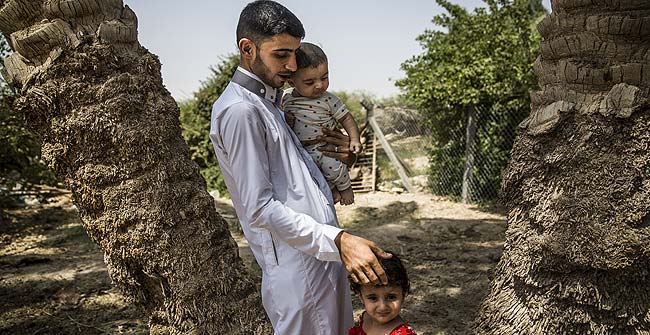 Ali Hussein Kadhim with his son and daughter at his family's date orchard in Diwaniya, Iraq, on August 26. (Bryan Denton/The New York Times)

Ali Hussein Kadhim, an Iraqi soldier and a Shiite, was captured with hundreds of other soldiers by Sunni militants in June and taken to the grounds of a palace complex in Tikrit where Saddam Hussein once lived.

The militants, with the Islamic State, separated the men by sect. The Sunnis were allowed to repent for their service to the government. The Shiites were marked for death, and lined up in groups.

As the firing squad shot the first man, blood spurted onto Kadhim's face. He remembered seeing a video camera in the hands of another militant.

He felt a bullet pass by his head, and fell forward into the freshly dug trench.

"I just pretended to be shot," he said.

A few moments later, Kadhim said, one of the killers walked among the bodies and saw that one man who had been shot was still breathing.

He waited about four hours, he said, until it was dark and there was only silence. About 200 yards away was the edge of the Tigris River.

He made it to the riverbank, where the reeds gave him some cover. There, he met an injured man named Abbas, a driver at Camp Speicher who had been shot by militants and shoved into the river.

Kadhim stayed there three days with Abbas, who was so badly wounded he could barely move. Kadhim ate insects and plants, but Abbas was in too much pain to eat much of anything.

"It was three days of hell," Kadhim said.

As Kadhim planned his escape, Abbas begged him to come back for him, and, if he could not, to at least tell the story.

"Let everyone know what happened here," Abbas told him.

Back now at his family home here in southern Iraq, Kadhim, 23, recounted his story on a recent afternoon while taking a break from harvesting dates in his uncle's orchard.

His is one of a very few witness accounts, and perhaps the most detailed, to emerge after the June massacre of Iraqi soldiers stationed at Camp Speicher, a former U.S. army base in Tikrit, Saddam's hometown.

Kadhim spoke plainly and evenly about his experience, and how he set off from the riverbank on a nearly three-week, underground railroad-style journey through insurgent badlands, relying on sympathetic Sunnis to deliver him to safety.

In an earlier interview with a video journalist, Kadhim still had the marks on his wrists from the handcuffs. Elements of his story were corroborated by a Sunni tribal sheik who protected him on his journey, and by Abbas' father, who reached out to Kadhim after he saw an interview he gave in the local news media.

The suspected scale of the massacre - Islamic State claimed it killed 1,700 Shiite soldiers, a figure that some Iraqi officials and Kadhim believe is accurate - would make it the deadliest sectarian atrocity in Iraq's recent history, more reminiscent of the mass killings carried out by Saddam's government than anything the country faced during the sectarian civil war in 2006 and 2007.

The militants are also believed to still be holding perhaps hundreds of other soldiers from the base in Tikrit as hostages, according to Kadhim. An adviser to the departing prime minister, Nouri al-Maliki, said the government believed that the hostages were being held in Anbar province.

The story of the massacre tells as much about the woeful state of the Iraqi military, a force created and trained by the U.S. at a cost of billions of dollars, as it does about the cruelty of Islamic State.

After militants stormed Mosul, Iraq's second-largest city, on June 10, they continued their offensive south toward Tikrit. In Tikrit, chaos and fear enveloped Camp Speicher, where Kadhim, a trainee who had joined the army just 10 days before Mosul fell, was posted. The U.S.-trained army officers fled, as they had in Mosul, Kadhim said.

"We were alone," he said. "So we decided to flee, because there were no officers."

He and his comrades took off their uniforms, put on civilian clothes - track suits and sandals for many of them - and, in a large group that Kadhim said amounted to about 3,000 soldiers, started walking out the front gates.

It was a terrible decision and a cruel fate: To this day, Camp Speicher has not fallen to the militants. Had Kadhim and his friends stayed where they were, they would almost certainly have been safe.

They thought they would walk as far as Baghdad, almost 120 miles south.

But just a few miles down the road, near Tikrit University, the men ran in to a group of about 50 Islamic State fighters in armored vehicles, he said.

"They told us, 'Don't worry, we will take you to Baghdad,'" Kadhim said. "They tried to make us feel safe.

Packed into trucks, the men were taken to the Tikrit palace grounds.

Over the next three days, the militants carried out wave after wave of killings around the palace and elsewhere in Tikrit. Human Rights Watch, which analyzed satellite imagery and examined photographs released by Islamic State, says it has confirmed that 560 to 770 men, at the least, were killed during that stretch. The group acknowledged that the total number may be higher still, and Islamic State itself put the number of men it killed there at 1,700.

A Culture of Revenge

In its campaign of blatantly sectarian- or ethnic-driven massacres like the one in Tikrit, Islamic State has been tearing open Iraq's wounds, creating a new wave of factionalism that has sent U.S. officials scrambling to call for better political inclusion and reconciliation. But many here say those efforts already seem irrelevant.

Kadhim and some other witnesses say that Sunni Arabs in Tikrit, including some from Saddam's tribe, assisted the militants in the mass killing, a charge that the families of the victims have made in the local news media. Parliament has said it will appoint a committee to investigate, but few feel confident that justice will come of it. Dozens of angry family members of missing soldiers stormed into Parliament on Tuesday, destroying furniture and demanding to speak to lawmakers, most of whom had quickly left the building.

The conquests of Islamic State have reawakened a sense among Iraq's Shiite majority that they are facing a threat to their very existence from Sunnis - and nothing highlights this in as dramatic a fashion as images of industrial-scale killings of Shiites in Saddam's hometown, with the participation of the dead dictator's tribesmen.

In recent days the images and stories emerging from this massacre have begun receiving wide play on Iraqi state television, whose programming has also long included shows detailing the abuses of Saddam.

Many here wonder how long the Shiites will restrain themselves from taking widespread revenge against Sunnis, and plunging the country into the sort of neighbor-killing-neighbor conflict of a few years ago.

In other countries that have confronted a brutal past, like South Africa and Bosnia, reconciliation has meant a painful process of apology and forgiveness that Iraq has never seriously pursued.

Amer al-Khuzaie, al-Maliki's adviser on reconciliation, visited South Africa last year to see if he could learn about how that country's experience might apply to Iraq. As he toured the prison on Robben Island, where Nelson Mandela had been incarcerated, he asked the tour guide how many prisoners were executed during Mandela's imprisonment.

"He told me 125," al-Khuzaie recalled. "This is an incomparable situation between us and South Africa," he said, referring to the trauma under Saddam. "We would have a thousand in one day."

He added: "The culture of Iraqis does not go for forgiveness. We come from the desert; our culture is for revenge."

Here in Diwaniyah, in a region of fertile farmland where several of the soldiers killed in Tikrit were from, the collective memory is still scarred by the trauma of a Shiite uprising against Saddam's rule in 1991 that was encouraged by U.S. officials. But the United States then stood by as Saddam's security forces slaughtered tens of thousands of people.
That explains why Shiites in the Iraqi south never trusted the Americans when they invaded in 2003, even though the invasion upended the political order of Sunni domination and placed the Shiites in power. It explains, too, why many Shiites have greeted the recent U.S. military intervention in Iraq with suspicion.

It was not massacres against Shiites, like the one in Tikrit, that prompted U.S. action, they say, but only because the Kurds in the north, and Yazidis, an ancient Iraqi religious minority, came under threat.

"They might want the scenario in 1991 to happen again, when they let the Iraqi people die under the injustice of Saddam's regime," said Ali al-Rubaie, a representative of the Shiite religious establishment in the holy city of Najaf.

Back on the riverbank, around 11 p.m., Kadhim said goodbye to Abbas and entered the water. It was cold and the current was strong, but after drifting downriver he managed to reach the other side.

In darkness, hearing faint gunshots in the distance, he walked about a half-mile north, he said, until he found an empty reed hut and fell deeply asleep. The next morning he approached a cluster of houses in the distance, and a Sunni family took him in and gave him his first proper meal in days: eggs and yogurt.

The family, worried about what might happen to them if Islamic State found them sheltering a Shiite, drove him to the home of friends in another village, where he was kept safe for three more days.

His next stop on the journey was the town of Al Alam, at the home of a Sunni tribal sheik, Khamis al-Jubouri, who had been operating an underground-railroadlike system for Shiite soldiers on the run from the militants.

"We also helped 40 Iraqi soldiers from Anbar, Diyala, Mosul and Baghdad get home safely with fake IDs we made for them," al-Jubouri said.

Kadhim stayed with the sheik for almost two weeks before they judged it safe enough to try to travel to Irbil, in the autonomous Kurdish region, a trip in which they passed through several Islamic State checkpoints, Kadhim said.

In Irbil, he met his uncle, who had flown up from Najaf. He finally arrived home here the next night, after a long, circuitous drive.

"It was beyond happiness," he said, of seeing his family again. "They were crying, and I was laughing."

He had a thick beard, and he had lost weight. "My daughter didn't recognize me, and she ran away," he said.

Kadhim has told his story in the local news media, and ever since his phone has been ringing with calls from family members of missing soldiers.

A military intelligence officer visited him, took his testimony, and gave him $430, a little less than half the monthly salary he earned as a soldier - a job he said he would never go back to.

Promoted
Listen to the latest songs, only on JioSaavn.com
(Reporting was contributed by Falih Hassan, Ali Hamza and Omar al-Jawoshy from Baghdad, and a Times employee from Najaf, Iraq.)