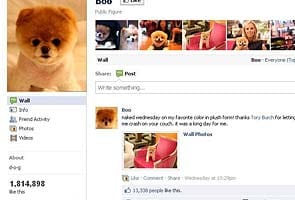 Five-year-old Pomeranian, Boo, got his own Facebook Page in 2009, The Sun reported.

"My friends loved looking at pictures of him. We started the first Facebook page as a joke," Boo's owner was quoted as saying.

It now has over 1.8 million fans and will launch his own book - "Boo, the Life of the World's Cutest Dog".

Promoted
Listen to the latest songs, only on JioSaavn.com
The cute appearance of the dog is the result of an unusual haircut he was given following an accident.

"The groomer said they wouldn't even be able to get a brush through him. I was really upset when I heard that. But when I picked him up, I found he was actually really cute that way," the owner said.