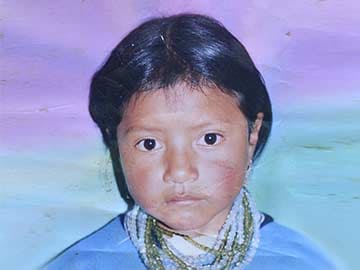 In an undated handout photo, Noemi Alvarez Quillay, 12, whose death after authorities caught her trying to cross the U.S. border has been ruled a suicide.

Noemi Alvarez Quillay took the first steps of the 6,500-mile journey to New York City from the southern highlands of Ecuador on Tuesday, Feb. 4, after darkness fell.

A bashful, studious girl, Noemi walked 10 minutes across dirt roads that cut through corn and potato fields, reaching the highway to Quito. She carried a small suitcase. Her grandfather Cipriano Quillay flagged down a bus and watched her board. She was 12.

From that moment, and through the remaining five weeks of her life, Noemi was in the company of strangers, including coyotes - human smugglers, hired by her parents in the Bronx to bring her to them. Her parents had come to the United States illegally and had settled in New York when Noemi was a toddler.

Noemi was part of a human flood tide that has swelled since 2011: The U.S. resettlement agency expects to care for nine times as many unaccompanied migrant children in 2014 than three years ago.

For these children wandering thousands of miles, it is a grueling journey, filled with dangers. The vast majority come from Central America. Noemi's trip was about twice as long. She had already tried once, leaving home in May, but was detained long before she even made it halfway.

"I went with a coyote and spent two months in Nicaragua and came back from there," she wrote in a school information sheet.

She got a little closer this year.

In March, a month after she left home, the police picked up Noemi and a coyote in Ciudad Juarez, Mexico. The authorities took her to a children's shelter. She was described as crying inconsolably after being questioned by a prosecutor. A few days later, she was found hanged from a shower curtain rod in a bathroom at the shelter. Her death, ruled a suicide by Mexican authorities, remains under investigation by a human rights commission there.

The number of unaccompanied minors entering the United States is expected to reach 60,000 in the 12 months ending Sept. 30, said Lisa Raffonelli, a spokeswoman for the Office of Refugee Resettlement, an increase from 6,560 in 2011. In Mexico, the number has more than doubled.

No single factor explains these surges, but in Noemi's hometown there are clues about the forces at work in her story.

In the district of El Tambo in Canar province, her maternal grandparents, Quillay, 57, and Maria Jesus Guaman, 59, live in an adobe home without running water. About 15 years ago, during an economic crisis in Ecuador, their adult children began migrating to the United States without visas.

"My four children went to find decent lives," Quillay said. "So I took over five grandchildren from when they were little."

They ate from the grandparents' farm. "We don't have the little sweets that they sometimes ask for," Quillay said.

"She was just born when her father left, and when she was 3, my daughter decided to go herself," Guaman said of Noemi. "I raised my granddaughter the same as the others."

As the children grew, their parents sent money to pay for the construction of a two-story concrete house nearby where the five grandchildren, cousins, lived on their own.

Leonela Yupa, a cousin and playmate of Noemi, remembered playing "cocinita" with her - fashioning from their imagination a little kitchen where they fixed pretend meals. Noemi often joined in one of the world's universal games: hide and seek.

The children moved through a landscape that is a hybrid of peasant houses, like the home of their grandparents, and larger, modern ones that are "a symbol of the success of the Ecuadorean immigrant," said Rafael Ortiz, mayor of El Tambo.

The Quillays' household without parents was common.

"We have 1,040 students, and at least 60 percent are children of migrant parents who have been under the care of grandparents, uncles or older siblings," said Magdalena Choglio Zambrano, a guidance counselor at the regional high school.

The parents abroad "at times send a little shirt, shoes, $100, but it is not the same as being papa or mama," Noemi's grandfather said.

A generation of children who grew up on their own in El Tambo have started to leave, getting a hand from their parents abroad, but still requiring shadowy journeys.

"Now we are seeing that the migrants are small children or teenagers whose parents are sending for them, running the risk of putting them in the  hands of the coyotes to whom they pay 15, 20, 25 thousand dollars," said Choglio, the guidance counselor.

The cost of the trip depends on whether the smuggler uses airline flights to cut down on overland travel, Ortiz said.

"We don't know anything, not how they go or where they go," Guaman said. The parents "made the arrangements directly from there, and they called to tell us when we had to send the girl."

Both grandparents say they and Noemi were reluctant for her to leave. Guaman said she argued with her daughter, the girl's mother.

"I said to her, 'Why take her away? She's studying here, she's doing well,'" Guaman said. "But my daughter says education in Ecuador is no good and it's better for her to study there. And she took my Noemi away, only for this to happen."

Noemi had to be persuaded by her parents.

"She was crying, she said she did not want to go," Sara Yupa, one of her cousins, recalled. "Then she was quiet."

Little is known about Noemi's travels until about 4,000 miles later, more than a month after she left home.

On Friday, March 7, in Ciudad Juarez, police saw Domingo Fermas Uves, 52, urinating outside a pickup truck, according to Alejandro Maldonado, a police spokesman. Inside was Noemi. In the official account, Fermas told officers that he was part of a network of smugglers hired by the girl's family to take her to the United States. The man gave false details about the girl, saying she was 8 years old and from an inland state in Mexico. The police recorded her name as Noemi Alvarez Astorga.

Noemi was taken to Casa de la Esperanza, a shelter for Mexican minors whose name means "House of Hope." Over that weekend, she was questioned by a prosecutor. After that, a doctor described Noemi as being "terrified," according to a report in El Diario of Juarez.

On March 11, when called to eat, Noemi instead went into the bathroom. Another girl could not get in. The doctor, Alicia Soria Espino, and others broke open the door and found Noemi hanging by the cloth shower curtain.

The next day, her parents in the Bronx received a phone call from a woman who told them that Noemi had safely crossed the border. Later that day, they received a second call saying that she had died, according to Ecuadorean consular officials.

The authorities determined that the girl initially thought to be an 8-year-old Mexican was probably the 12-year-old Ecuadorean. In part because her parents, who do not have legal immigration status, decided not to go to Mexico, DNA tests were required to confirm her identity, said Jorge W. Lopez, the Ecuadorean consul general in New York. Autopsies found no sign of a sexual assault, a common crime against migrants.

The man said to have been the smuggler, Fermas, was arrested but was later freed by a judge, who did not find enough evidence to hold him for prosecution, said Angel Torres of the federal prosecutor's office in Ciudad Juarez.

"Mr. Fermas is still under investigation for immigrant trafficking," Torres said. In published interviews, Fermas has said that the story about the pickup truck was untrue and that the police had entered his house and taken the girl under the guise of rescuing her.

In the week after Noemi's death, 370 foreign child migrants were detained across Mexico, according to the national immigration agency. Nearly half were traveling alone.

The minors coming from Central America and Mexico are "propelled by violence, insecurity and abuse," the U.N high commissioner for refugees said in a report issued the day after Noemi's death. The prospect of immigration reform in the United States is also enticing, Lopez said, because of the belief that anyone already in the country illegally will be allowed to stay.

Noemi's parents have said little publicly. Her mother, Martha V. Quillay, who works in a hair salon, spoke briefly with a reporter, then curtailed the conversation. Her father, Jose Segundo Alvarez Yupa, a construction worker, said it was too difficult to discuss.

"These are private matters," he said. "This is a very painful thing. It's all over. We want to recover, we want to move on."

Last week, President Rafael Correa of Ecuador, who was visiting New York, called on the family at their home in the Bronx to offer condolences. Quillay posted pictures from the president's visit on her Facebook page.

Monsignor James Kelly, pastor of St. Brigid's Roman Catholic Church in Brooklyn, which has a large number of Ecuadorean parishioners, said recently that he heard every day about the young people traveling alone.

Promoted
Listen to the latest songs, only on JioSaavn.com
"I had parents in here yesterday whose child was coming north," Kelly said. "They wanted a Mass said, that the journey would be safe."