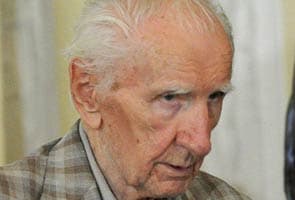 Budapest: Prosecutors in Hungary have indicted a 98-year-old former police officer for abusing Jews and assisting in their deportation to Nazi death camps during World War II.

Laszlo Csatary, who has denied the charges, was first detained by Hungarian authorities in July 2012 after his case was made public by the Simon Wiesenthal Center, a Jewish organization active in hunting down Nazis who have yet to be brought to justice.

Today's indictment by the Budapest Investigative Prosecutors' Office says Csatary was the chief of an internment camp for Jews in Kosice - a Slovak city then part of Hungary - in 1944, and that he beat them with his bare hands and a dog whip.

Promoted
Listen to the latest songs, only on JioSaavn.com
Prosecution spokeswoman Bettina Bagoly said that Csatary's trial is expected start within three months.