Migrant Child Dies In US Custody On Christmas, Second Death This Month

The child died shortly after midnight at a hospital in New Mexico. He is the second border-crosser to die in government custody this month. 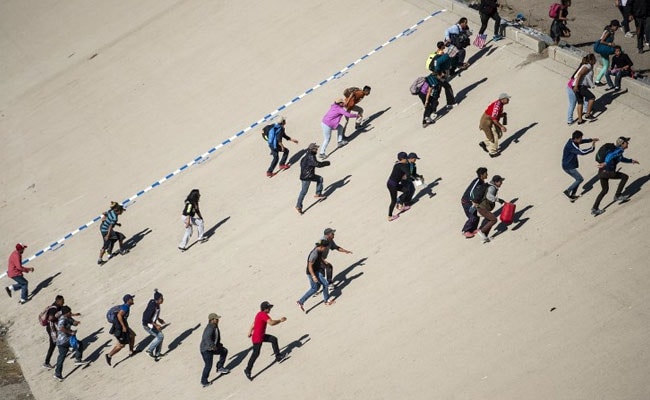 An 8-year-old Guatemalan child detained by U.S. Customs and Border Protection died early Tuesday at a hospital in New Mexico, the agency reported, the second migrant child to die in government custody this month.

In a statement, Rep. Joaquin Castro, D-Texas, identified the boy as Felipe Alonzo-Gomez. Castro, chairman-elect of the Congressional Hispanic Caucus, said that "many questions remain unanswered, including how many children have died in CBP custody."

The boy died shortly after midnight on Christmas Day, the CBP said.

His death came 17 days after 7-year-old Jakelin Caal, another Guatemalan national, died Dec. 8 of dehydration and shock less than a day after she was apprehended by border agents.

The death highlighted the stalemate over President Donald Trump's demand that Congress approve additional money for a wall along the U.S. border with Mexico, a standoff that has shut down parts of the federal government for four days. Trump said again Tuesday that there will be no change until his demands are met.

"I can't tell you when the government is going to reopen," he told reporters in an Oval Office appearance on Christmas morning. "I can tell you it's not going to be open until we have a wall, a fence, whatever they'd like to call it. I'll call it whatever they want. But it's all the same thing. It's a barrier from people pouring into our country."

About 25 percent of the government has been shut down since midnight Saturday.

The president defended his call for $5 billion to construct a wall along the border with Mexico, saying that only an Olympic athlete would be able to scale such a structure. "If you don't have that, then we're just not opening," Trump said.

All told, about 800,000 of 2.1 million federal workers nationwide - or more than a third - are estimated to be affected in some way by the shutdown. Trump claimed that many government employees support the shutdown.

"Many of those workers have said to me, communicated - stay out until you get the funding for the wall," Trump said. "These federal workers want the wall."

But his claim conflicted with accounts from the workers' union leaders.

"Federal employees should not have to pay the personal price for all of this dysfunction," Tony Reardon, president of the National Treasury Employees Union, which represents 150,000 members at 33 federal agencies and departments, said Monday. "This shutdown is a travesty. Congress and the White House have not done their fundamental jobs of keeping the government open."

The child who died Tuesday had become ill Monday, according to a CBP news release. A Border Patrol agent took him and his father to Gerald Champion Regional Medical Center in Alamogordo, New Mexico, where the boy was diagnosed with a cold, according to the CBP.

Later, he was found to have a fever and was held for an additional 90 minutes before he was released with prescriptions for an antibiotic and Ibuprofen.

But the child became more seriously ill Monday night, when he vomited and was taken back to the hospital. He died shortly after midnight on Christmas Day.

The cause of the child's death is not known.A CBP spokesman declined to provide details on where the child was being held or when he was apprehended.

A CBP official familiar with the circumstances of the case, who spoke on the condition of anonymity because he is not authorized to speak publicly, said the child was apprehended in El Paso, Texas, and then taken to a Border Patrol cell at a checkpoint between Las Cruces andAlamogordo, New Mexico, because of overcrowding in the El Paso holding cells.

The cells in the Alamogordo facility are small, designed to hold an adult for just a few hours during processing. They are not set up to hold families, the official said.

An investigation into CBP actions will be conducted by the agency's Office of Professional Responsibility, the news release said. The Department of Homeland Security's inspector general and Congress have been notified, it said.

The Guatemalan government also has been notified. Guatemalan officials are meeting with the boy's father and will speak with any family members who are in Guatemala, according to the news release.

The hospital said in a statement that "privacy regulations prevent us from sharing information about any individual patient . . . Our thoughts and prayer are with this family during this very difficult time."

Under guidelines established after the government waited several days to inform Congress about Jakelin Caal's death, CBP agreed to notify lawmakers within 24 hours of a death of anyone in its custody and issue a media statement an hour after that. Notifications also must be issued to nongovernmental organizations that work with migrants and others.

Rep. Lucille Roybal-Allard, D-Calif., the ranking Democrat on the Health and Homeland Security appropriations subcommittee, said in an interview that "the reality is that a detention center is no place for a child, particularly a sick child. When that child was determined to be ill, had a 103-degree fever, why they would send that child back to a detention center, which is really not fit for even a well child?

"That's something that we're looking into because that policy or whatever caused them to send that child back has to be changed."

In a tweet directed at Homeland Security Secretary Kirstjen Nielsen, Rep. Luis Correa, D-Calif., said, "This is the second child this month. What is going on at @DHS.gov? Does @HouseHomeland have to start subpoenaing you to get the truth?"

Ruby Powers, a Houston-based lawyer and member of the American Immigration Lawyers Association, said the boy's death is not unexpected given the difficult conditions that immigrants and their children face on the journey north to the United States and the way authorities shuttle families between facilities.

"There's a lack of ownership of the detainee, thinking they won't be in their hands very long, moving them along to the next location, and that is where the lack of care can occur," she said. " . . . I know I'm supposed to be shocked, but knowing everything I know, I'm not shocked."

Jakelin's family has disputed CBP reports that the child went several days without food and water before she died, saying she was healthy when she arrived in the United States. In a news conference earlier this month, a migrant advocate said the girl's father, 29-year-old Nery Caal, had told him that Jakelin was healthy and had no preexisting conditions.

"He's been very clear, very consistent that his daughter was healthy, and his daughter very much wanted to come with him," said Ruben Garcia, founder and executive director of Annunciation House, an El Paso-based nonprofit that aids migrants.

The symptoms the 8-year-old boy exhibited are similar to the ones Jakelin showed before she died.

More than a day before she died, Jakelin, her father and 161 other Central American migrants crossed the U.S. border outside Antelope Wells, New Mexico, seeking to turn themselves in to Border Patrol agents.

The Department of Homeland Security has said that the girl did not show signs of health problems during a routine check conducted when she and her father were taken into custody.

"The initial screening revealed no evidence of health issues. During the screening, the father denied that either he or his daughter were ill. This denial was recorded on Form I-779 signed by the father," the DHS account said. It added that they were offered food and water, and had access to restrooms. The form was in English, but CBP officials said agents provided a verbal translation.

The family's attorneys have said that it was "unacceptable" to have Jakelin's father sign a document in a language that he didn't understand.

Jakelin's body was returned to Guatemala on Monday.

Moore reported from El Paso, Texas. The Washington Post's Paul Schwartzman and Elyse Samuels in Washington contributed to this report.

Guatemalan childMigrant Dies In US Custody