The protests represent a second phase of a week-long movement in early October that ended with more than 150 people dead. 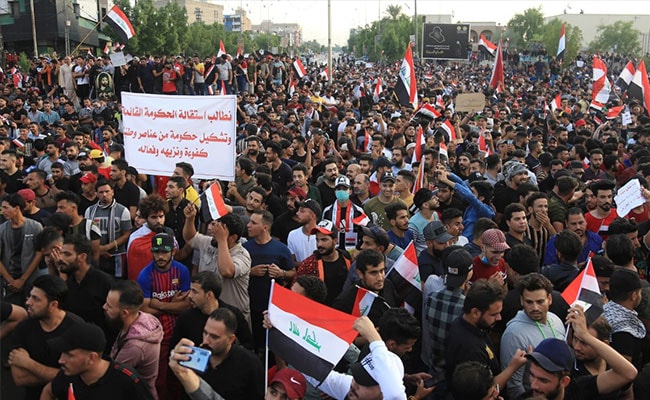 The protests represent a second phase of a week-long movement in early October that ended with more than 150 people dead.

Rallies had been set to resume on Friday, with a range of actors from Iraq's highest Shiite authority to the United Nations urging restraint.

They began early and calm on Thursday evening, with protesters exchanging flowers with security forces and the interior minister insisting police would "protect" protesters.

But by Friday evening, demonstrations across the country had descended into violence that left 42 protesters dead -- at least half of them as they attacked the headquarters of armed factions or government bodies.

Twelve died in the southern city of Diwaniyah alone, while setting fire to the headquarters of the powerful Badr organisation, part of the Hashed al-Shaabi paramilitary force, security sources told AFP.

Another 30 came in a toll compiled by the Iraqi Human Rights Commission, which did not include the Diwaniyah dead.

The national rights watchdog said the 30 were killed by gunshots or tear gas canisters in the capital and four southern provinces.

Several died while trying to storm the offices of Asaib Ahl al-Haq, another armed faction, in two southern cities.

Parliament is scheduled to meet on Saturday to discuss the protests further.

Among them was Basra, which was swept up in its own wave of protests last year over moribund public services, with outraged citizens also burning government and party offices.

Similar grievances sparked this month's protests: one in five Iraqis still lives in poverty and youth unemployment sits around 25 percent, according to the World Bank.

The country ranks as OPEC's second-biggest oil producer -- and the 12th most corrupt nation in the world, according to Transparency International.

But protesters said this year's demonstrations were unprecedented because of their independence and the violence with which they were met.

At least 157 people were killed in the first few days of October, according to a government probe, a vast majority of them protesters in Baghdad.

"We deeply regret the number, the large number of people that have been killed in these circumstances," he said.

Activists had urged Iraqis to return to the streets on Friday to mark a year since Prime Minister Adel Abdel Mahdi came to power.

It was also the deadline set out by Iraq's top Shiite cleric, Grand Ayatollah Ali al-Sistani, for Abdel Mahdi to respond to demonstrators' demands.

In a much-awaited sermon on Friday, Sistani's representative urged protesters and security forces to show "restraint," warning of "chaos" if violence broke out again.

His sermon appeared to echo the package of reforms put forward by Abdel Mahdi, including an anti-corruption campaign, a job creation drive and improved social welfare.

"Adel Abdel Mahdi is lying to us," protesters shouted in Baghdad, just hours after the premier's televised appearance in which he defended his reform agenda.

"They are all liars -- they lie when they promise us jobs and when we protest, they fire tear gas at us!" shouted another.

Thousands massed Friday outside Baghdad's Green Zone, which hosts government offices and foreign embassies, but security forces used a volley of tear gas to push them back.

The enclave had been opened to the public for several months under Abdel Mahdi in response to the improving security situation across the country.

But security was beefed up again when protesters began gathering earlier this month at Baghdad's iconic Tahrir (Liberation) Square, which lies across a key bridge from the Green Zone.

In 2016, supporters of firebrand cleric Moqtada al-Sadr breached the area in response to his calls to hit the streets.

Sadr, an influential ex-militiaman who controls the largest parliamentary bloc, has thrown his weight behind the recent protests.

This week, he even instructed members of his own paramilitary force to be on "high alert," and they could be seen in parts of Baghdad on Friday in a clear show of force.

Other paramilitaries have backed the government, including the powerful Hashed al-Shaabi force whose political branch is the second-largest parliamentary bloc.

The country has been ravaged by decades of conflict that finally calmed in 2017 with a victory declared over the Islamic State group.

But in response to protests, authorities have shut roads and imposed curfews and an internet blackout, which has been mostly lifted although social media remains blocked.

(Except for the headline, this story has not been edited by NDTV staff and is published from a syndicated feed.)
Comments
Adel Abdel MahdiIraqProtest in Iraq