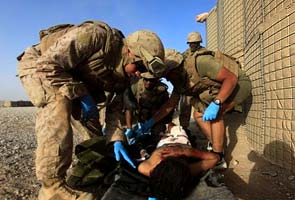 Kabul: Nearly 80 American soldiers were wounded and five Afghans civilians were killed in a Taliban truck bombing targeting an American base in eastern Afghanistan, NATO said Sunday, a stark reminder that the war in Afghanistan still rages 10 years after the Sept. 11 terror attacks against the United States.

No U.S. soldiers were killed in Saturday night's bombing, which took place hours after the Taliban vowed to keep fighting U.S. forces in Afghanistan until all American troops leave the country. The insurgent movement also stressed that it had no role in the Sept. 11 attacks.

The blast shaved the facades from shops outside Combat Outpost Sayed Abad in Wardak province and broke windows in government offices nearby, said Roshana Wardak, a former parliamentarian who runs a clinic in the nearby town of the same name. The Taliban claimed responsibility for the attack.

Eight wounded civilians were brought to Wardak's clinic, two of them with wounds serious enough that they were sent to Kabul. She said one 3-year-old girl died of her wounds on the way to the clinic.

The Wardak governor's office confirmed the death toll and said a total of 17 Afghans were wounded - 14 civilians and three security officers.

The attack was carried out by a Taliban suicide bomber who detonated a large bomb inside a truck carrying firewood, NATO said. It was unclear how many foreign and Afghan soldiers were serving on the base.

"Most of the force of the explosion was absorbed by the protective barrier at the outpost entrance," NATO said, adding that the damage was repairable and that operations were continuing.

NATO said none of the 77 injuries sustained by the Americans was life-threatening. Spokesman Maj. Russell Fox said Sunday that all the international troops at the combat outpost are American.

The governor's office said the blast was so powerful it damaged more than 100 shops in Sayed Abad's main bazaar, the hospital and the small town's administration building.

On Sunday, the U.S. Embassy in Kabul held a memorial service to mark the anniversary of the Sept. 11 attacks. A military band played as American troops raised an American flag in front of about 300 assembled U.S. and Afghan officials.

Marine Gen. John Allen, the commander of U.S. and NATO troops in Afghanistan, urged those assembled to honor the memory of those who died.

"On that day we lost mothers and fathers, sons and daughters we lost people of many nations and many religions, today we remember, we honor them all," he said.

The Afghan foreign minister said the attacks bound Afghans and Americans together in a "shared struggle."

In a statement emailed to media, the Taliban accused the United States of using the Sept. 11 attacks as a pretext to invade Afghanistan and said the international community was responsible for killing thousands of Afghans during the invasion and ensuing occupation.

"Each year, 9/11 reminds the Afghans of an event in which they had no role whatsoever," the Taliban said. "American colonialism has shed the blood of tens of thousands of miserable and innocent Afghans."

The United States and its allies invaded Afghanistan on Oct. 7, 2001, after the Taliban, who then ruled the country, refused to hand over Osama bin Laden.

The late Al Qaeda leader was at the time living in Afghanistan, where the terror network had training camps from which it planned attacks against the U.S. and other countries.

"The Afghans have an endless stamina for a long war," the statement said. "Through a countrywide uprising, the Afghans will send the Americans to the dustbin of history like they sent other empires of the past."

The statement was issued by the Islamic Emirate of Afghanistan, the official title used by the Taliban when they ruled the country.

The insurgent group continues to launch regular attacks and orchestrate assassination campaigns against those allied with the government. In addition to the attack in Wardak on Saturday, 10 Afghan civilians were killed in two separate roadside bombings.

Although the Taliban were swiftly driven from power by the U.S.-led coalition, they managed to use the years of the Iraq war - when America focused its military strength on the conflict against Saddam Hussein - to regroup, rearm and reorganize.

They began winning back ground lost to the international military coalition until President Barack Obama sent in 30,000 more troops last year to help.

Although the coalition has made some gains in the Taliban's traditional southern strongholds, violence has not abated around the country.

Promoted
Listen to the latest songs, only on JioSaavn.com
The U.S. has begun withdrawing some of its 100,000 troops and will send home 33,000 by the end of next year. The international military coalition has already begun transferring security responsibilities to newly trained Afghan forces with the aim of removing all their soldiers by the end of 2014.

Bin Laden was killed in May in a raid on his house in northwestern Pakistan by helicopter-borne U.S. Navy SEALs.
Comments
Taliban truck bombingUS soldiers in AfghanAmericans injured in Afghan