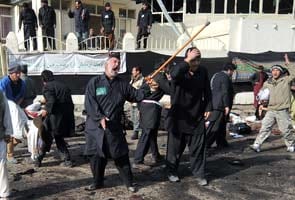 Kabul: A suicide bomber struck a crowd of Shiite worshippers who packed a Kabul mosque Tuesday to mark a holy day, killing at least 56 people, and a second bombing in another city killed four more Shiites. They were the first major sectarian assaults since the fall of the Taliban a decade ago.

A third attack, a motorcycle bomb in the southern city of Kandahar, killed one civilian. But police said it did not target Shiites as they commemorated Ashoura, which marks the seventh century death of the Prophet Muhammad's grandson Imam Hussein.

Religiously motivated attacks on Shiites are rare in Afghanistan although they are common in neighbouring Pakistan.

A man who claimed to be from Lashkar-e-Jhangvi, one of Pakistan's most ruthless Sunni militant groups which has carried out attacks against Shiite Muslims, called various media outlets in Pakistan to claim responsibility for the bombing in Kabul, which was reminiscent of the wave of sectarian attacks that shook Iraq during the height of the war there. The validity of the claims could not be determined.

The bomber blew himself up in a crowd of men, women and children gathered outside the Abul Fazl shrine. Mahood Khan, who is in charge of the shrine near the presidential palace, said the explosion occurred just outside a packed courtyard where dozens of worshippers were lined up as they filed in and out of the crowded building.

Some men were beating themselves in mourning, an Ashoura tradition, and food was being distributed.

"It was a very powerful blast," Khan said. "The food was everywhere. It was out of control. Everyone was crying, shouting. It is a disaster."

Bodies of the dead lay on top of one another where they fell. Survivors with blood-smeared faces cried amid the chaos. A few minutes after the blast, bodies could be seen loaded into the trunks of cars while wounded were led away by friends and relatives. Survivors wept in the streets.

Mustafa, a shopkeeper, said he and his mother were delivering food to the worshippers when the blast occurred. Two groups of 150 to 200 people from Kabul had just prayed at the shrine and left.

Another group of more than 100 from Logar province was entering when the explosion occurred. He said the suicide bomber was at the end of the line of worshippers from Logar when he blew himself up near one of the gates to the shrine.

"It was very loud. My ears went deaf and I was blown 3 meters (yards)," said Mustafa, who uses only one name. "There was smoke and red blood on the floor of the shrine. There were people lying everywhere."

The shrine's loudspeaker continued to blast a recitation of the Quran as ambulances carried bodies and wounded away. Women stood outside wailing and holding crying children.

The Public Health Ministry said 56 were killed - including two women and four children. Sayed Kabir Amiri, who is in charge of Kabul hospitals said more than 160 were wounded. It was the single deadliest attack in the Afghan capital in more than three years.

Four other Shiites were killed in the northern city of Mazar-i-Sharif. A bomb strapped to a bicycle exploded as a convoy of Afghan Shiites was driving down the road, shouting slogans for Ashoura. Health Ministry spokesman Sakhi Kargar gave the death toll and said 21 people were wounded.

The Interior Ministry said police defused another bomb planted in Mazar-i-Sharif near the one that blew up.

The Ministry of Interior blamed the Taliban and "terrorists" for the attacks.

The Taliban strongly condemned the attacks and said they deeply regretted that innocent Afghans were killed and wounded.

Afghan President Hamid Karzai, speaking at a news conference after meeting German Chancellor Angela Merkel in Berlin, said the attack was unprecedented in scope. He said it was "the first time that on such an important religious day in Afghanistan terrorism of that horrible nature is taking place." Karzai cut short his visit to Europe to return to Kabul. He cancelled his trip to Britain where he was to meet Prime Minister David Cameron, Prince Charles and deliver a speech to the London School of Economics, British officials said.

Mohammad Bakir Shaikzada, the top Shiite cleric in Kabul, said he could not remember a similar attack having taken place on such a scale.

"This is a crime against Muslims during the holy day of Ashoura. We Muslims will never forget these attacks. It is the enemy of the Muslims who are carrying them out," he said, declining to place blame.

Shiites make up about 20 percent of Afghanistan's 30 million people, most of them ethnic Hazaras. Although thousands of Hazaras were massacred by the Taliban during fighting in the 1990s, Afghan insurgents - nearly all of them Sunnis - in recent years have focused their attacks primarily on U.S.-led NATO troops and Afghan security forces.

It was unclear whether Tuesday's attacks mark a change in Afghan Taliban strategy or were carried out by al-Qaida or another group based in Pakistan, where Sunni attacks on Shiites are common. Hard-line Sunnis consider Shiites nonbelievers because their customs and traditions differ from the majority sect.

In neighboring Pakistan, Sunni militants with links to al-Qaida and the Taliban have carried out scores of bombings and shootings across Pakistan against minority Shiites. One of the deadliest groups has been the Punjab-based Lashkar-e-Jhangvi, which also claimed responsibility for gunning down 26 Shiites this summer riding in a bus through southwestern Baluchistan province.

Like Al Qaeda, the Taliban and other Sunni extremist groups, Lashkar it regards Shiite Muslims as nonbelievers and potential targets for attack.

Pakistan is a majority Sunni state, with Shiites making up about 15 percent of the 180 million population. Most Sunnis and Shiites live together peacefully, but tensions have existed for decades.

Promoted
Listen to the latest songs, only on JioSaavn.com
The last incident of violence between Shiites and Sunnis following the U.S. invasion 10 years ago occurred in early 2006, during Ashoura commemorations in the western city of Herat. During those riots, blamed on Islamic extremists, five people were killed and more than 50 injured.

The Kabul shrine attacked is close to the palace where Karzai lives and who is in Europe to attend an international conference on Afghanistan. It is named after Abul Fazl, who was an adviser to a 14th century Mogul emperor. The shrine and its blue minaret is one of Kabul's better known shrines. It is located in Murad Khane area near the Kabul river, a district that has been listed by the World Monuments Fund as one of its 100 most endangered sites of cultural heritage.