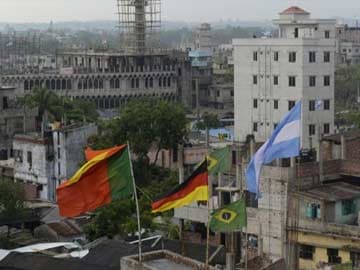 The national flags of countries competing in the forthcoming FIFA World Cup are flown above rooftops in the Bangldeshi town of Bardi, north-west of Dhaka on June 1, 2014

Dhaka: Bangladesh garment manufacturers bagged at least $500 million in export orders to sew World Cup jerseys for fans across the globe in a major industry boost after a string of disasters, officials said on Monday.

The acting head of the Bangladesh Knitwear Manufacturers and Exporters Association (BKMEA) said the country's shipment of garments grew around 14 per cent this year with World Cup orders playing a key role.

BGMEA is a group of around 1,000 garment factories, which mostly make T-shirts.

"Some 100 of our factories got orders to make jerseys for World Cup fans. We don't have an accurate figure of the total value of the World Cup related merchandise exports. But it will be between $500-$1,000 million," Mohammad Hatem told AFP.

Hatem said Bangladesh's shipments of garments would hit a record $25 billion in the fiscal year ending this month, up around three billion dollars than the previous year. "A big part of the growth came from the World Cup merchandise," he said.

Hatem said the Bangladeshi plants supply clothing to the sportswear giants like Puma and Adidas and made jerseys for fans of almost all the World Cup's 32 teams, thanks largely to its low-cost reputation.

Bangladesh is the world's second largest clothing maker after China. The garment industry is the economic mainstay, making up 80 per cent of the nation's annual exports and providing jobs to more than four million people.

"My factory alone made 250,000 World Cup jerseys for countries like Germany, France, Spain, Belgium, Italy and Portugal," he said.

One of the Bangladeshi suppliers of Puma bagged orders of three million dollars to make jerseys for football supporters of Brazil, Argentina and Chile, the company's owner Rezaul Hasanat told AFP.

"If you take into account all the World Cup related merchandise that Bangladeshi factories have made this year, I won't be surprised if the figure touches one billion dollars," Hasanat, of Viyellatex Group, said.

Many factories made products like flags and caps and did the shipments through small buying houses, whose figures are not usually monitored by major garment trade groups like the BKMEA and the Bangladesh Garment Manufacturers and Exporters Association (BGMEA).

Promoted
Listen to the latest songs, only on JioSaavn.com
The orders came despite a series of disasters to hit the Bangladesh garment industry, including the Rana Plaza factory collapse in April 2013, which left at least 1,138 people dead.

The World Cup kicks off on June 12 in Sao Paulo, where 65,000 spectators to are expected for the opening fanfare that pits hosts and five-time champions Brazil against Croatia.