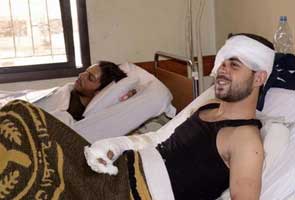 Beirut: The Syrian Observatory for Human Rights said 322 people died this week during a toxic gas attack in a Damascus suburb, the vast majority of them from the gas itself.

The Britain-based Observatory gave a count of "322 dead, including 54 children, 82 women and dozens of rebels, as well as 16 unidentified bodies."

Director Rami Abdel Rahman later clarified that not all of the fatalities, but "more than 300," had died directly from the effects of the gas. That included the women and children already cited.

Hours earlier, medical charity Doctors Without Borders (MSF) said 355 people had died after around 3,600 patients displaying "neurotoxic symptoms" flooded into three hospitals on Wednesday, the day of the alleged attacks.

The victims all arrived within less than three hours of each other, and MSF director of operations Bart Janssens said the pattern of events and the reported symptoms "strongly indicate mass exposure to a neurotoxic agent".

Promoted
Listen to the latest songs, only on JioSaavn.com
There has been no independent verification of the number of dead, and the medical humanitarian organisation was the first independent source to report such a high toll.

The government has strongly denied th allegations against it, but has yet to accede to demands that UN inspectors already in the country be allowed to visit the sites.