3 Years Ago It Could Not Walk. Now Humanoid Robot Atlas Does Gymnastics.

But until now, most of the machine's maneuvering - whether it was jogging, hopping over a log or executing box jumps - has remained well within the realm of average human athleticism. 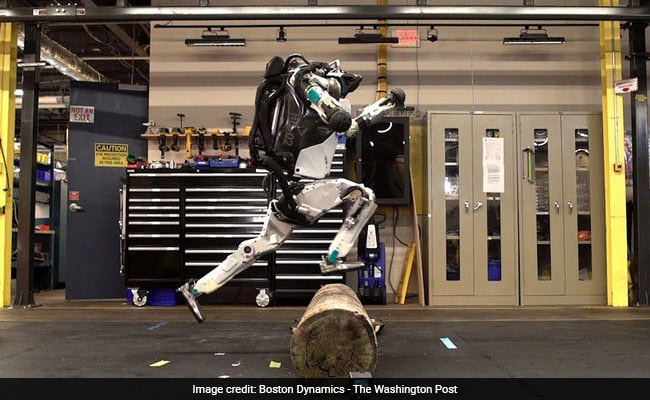 Atlas's gymnastic skills makes it look like a professional athlete.

But until now, most of the machine's maneuvering - whether it was jogging, hopping over a log or executing box jumps - has remained well within the realm of average human athleticism.

If the tech company's recently uploaded video is any indication, Atlas has, in a matter of months, graduated from middle-school gym class to something approaching a professional athlete. In the 38-second video, the sturdy, battery-powered machine - standing 4 foot 9 inches and weighing 176 pounds - unleashes an exceedingly nimble routine (using its legs, arms and torso) with a degree of gracefulness that you'd expect from a human with years of training.

"We created the maneuvers using new techniques that streamline the development process," Boston Dynamics wrote in the video's description. "First, an optimization algorithm transforms high-level descriptions of each maneuver into dynamically-feasible reference motions. Then Atlas tracks the motions using a model predictive controller that smoothly blends from one maneuver to the next."

Despite that smoothness, the robot isn't perfect, according to its handlers.

"Using this approach, we developed the routine significantly faster than previous Atlas routines, with a performance success rate of about 80%," the description adds.

Within hours of being posted online, the latest Atlas video had racked up nearly 1.5 million views and thousands of comments, many of them suggesting the robot's newfound athleticism was evidence that mankind's reign over machines is nearing its expiration date.

"So we just going to keep acting like we never seen Terminator?" one commenter wrote.

"Absolutely amazing!" added another. "I can smell the future where robots are roaming in the streets with us!"

In recent years, Boston Dynamics has become known for two things: creating robots whose movements mimic humans and animals with a degree of accuracy that many find surprising, if not unnerving. And then, without warning, posting cryptic videos of those robots online, where they quickly go viral, capturing some mixture of excitement and terror about the rapid rise of autonomous machines.

Boston Dynamics was purchased by Japan's Softbank from Alphabet in 2017. In recent years, it has produced four-legged robots - with names like Spot, Wildcat and BigDog - that can open doors, carry heavy loads and run nearly 20 mph, but its most recognizable product appears to be Atlas, the humanoid athlete that Boston Dynamics labels, "the world's most dynamic humanoid robot."

Guided by lidar - a sensor that uses a pulsed laser sensor to measure the distance between objects - and stereo vision, the compact robot is able to haul nearly 25 pounds. Boston Dynamics says Atlas can also manipulate objects in its environment, traverse rough terrain, keep its balance when pushed and get back up when tipped over.

As recently as three years ago, Atlas was recorded awkwardly tramping through the snow at a slow speed, its mechanical body lacking any of the fluidity and agility that it displays now.

Curiosity about Atlas gained momentum last year when Boston Dynamics posted a 34-second clip on YouTube showing the formerly halting robot going for a casual and smooth-looking jog in a grassy residential area. The video, which captured the distinct photocopier-like sound created by the robot's movements, seemed to catch many viewers by surprise, including the Daily Mail, which covered Atlas's physical feat at the time.

"If you thought you'd be able to run away from the terrifying new breed of robots," the paper wrote, "bad news."