Photos and videos of the aftermath showed police cars on the scene with their lights flashing. Fire trucks and ambulances were parked near the festival grounds. 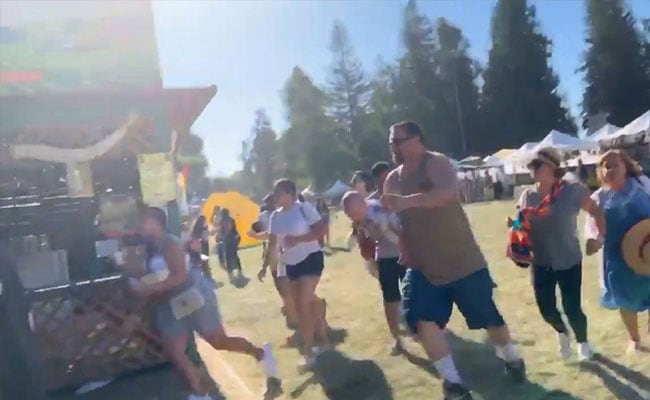 Three people are dead and at least 15 are injured after a shooting Sunday evening at a festival in Gilroy, California, according to police. One gunman was killed by officers at the scene, Gilroy Police Chief Scot Smithee said early Monday morning. Police are searching for a possible second person involved, though it's unclear whether that person also fired on the crowd or assisted the shooter.

"We believe based on witness statements that there was a second individual involved in some way," Smithee said at a news conference. "We just don't know in what way.".

Police responded to the Gilroy Garlic Festival at 5:41 p.m. local time, Smithee said. More than a dozen ambulances and fire department units were also dispatched to the festival grounds located about 30 miles south of San Jose, according to the San Francisco Chronicle.

The Gilroy Police Department tweeted Sunday night that it has set up a center where families can find their loved ones.

"The hearts of Gilroy PD and entire community go out to the victims of today's shooting at the Garlic Festival," police said.

Julissa Contreras and her boyfriend, Mario Camargo, were browsing at a food tent when they saw a man in a military-style outfit emerge from a nearby access road and start shooting "left to right and right to left," Contreras told The Washington Post in a phone interview. Contreras and Camargo ran in different directions, each taking shelter behind tents with crying children and frantic parents. Some people froze, and others sprinted. Some appeared to play dead, Camargo said.

Once they heard the gunfire stop, Contreras and Camargo each made a run for the entrance, eventually reuniting in the parking lot. Camargo said he saw two wounded people as he fled.

"One guy was able to talk. He was saying, 'Just go! Just go!" Camargo recalled. "People were crying, screaming, running in different directions. It was complete pandemonium."

yo somebody was shooting at the gilroy garlic festival. be safe pic.twitter.com/B39ZIYe8wr

California Gov. Gavin Newsom, a Democrat, called the incident "nothing short of horrific." San Jose Mayor Sam Liccardo, a Democrat, tweeted that the city's police and fire department were sent to Gilroy to help with what he called a "horrific shooting."

"What's going on?" a person asked in one of the videos. Seconds later, a sharp crack echoed out, prompting screams as people could be seen fleeing in every direction.

"Oh, they're shooting," a breathless voice could be heard saying.

One witness said he was leaving the festival when he felt a bullet whiz past his head, according to NBC Bay Area. Another man told KTVU that he heard anywhere from 30 to 40 shots go off.

"People started running towards us yelling and screaming that there's a guy shooting people," the man said.

Photos and videos of the aftermath showed police cars on the scene with their lights flashing. Fire trucks and ambulances were parked near the festival grounds.

The Gilroy Garlic Festival was founded in 1979 and is billed as "the world's greatest summer food festival." The annual event, which was in its third and final day on Sunday, draws thousands of visitors each year.

On Sunday, President Donald Trump tweeted that law enforcement was at the scene in Gilroy and warned people to "be careful and safe!"

Sen. Kamala Harris, D-Calif., tweeted that her office is "closely monitoring the situation."

"Grateful to first responders who are on the scene in Gilroy and keeping those injured by such senseless violence in my thoughts," she said.

(Except for the headline, this story has not been edited by NDTV staff and is published from a syndicated feed.)
Comments
CaliforniaGilroy Garlic Festival