"2020 Caravan" of around 3,500 undocumented migrants gathered on the Guatemalan side of the Suchiate River at dawn demanding authorities let them continue their journey to the US. 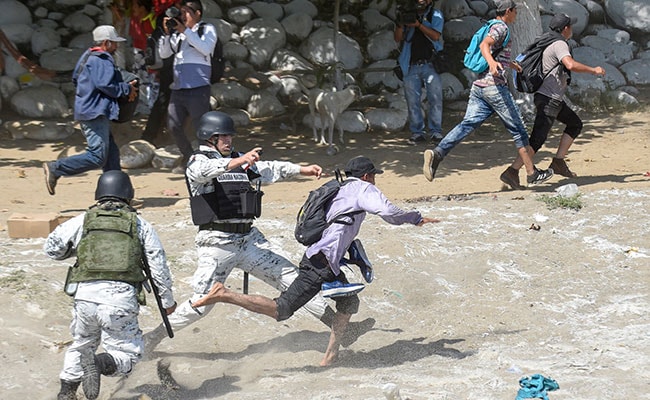 Hundreds of Central Americans from a new migrant caravan tried to storm into Mexico Monday by fording the river that divides the country from Guatemala, but National Guardsmen fired tear gas to force them back.

The Central Americans, from the so-called "2020 Caravan" of around 3,500 undocumented migrants, gathered on the Guatemalan side of the Suchiate River at dawn, demanding migration authorities let them continue their journey to the United States.

When authorities did not immediately respond, the migrants began wading across the river, which is shallow this time of year.

Mexican troops fired tear gas to force them back, leading to scenes of chaos as huge crowds of people flailed across the river.

Scores of migrants, many with cloths tied around their faces to protect them from the gas, pelted the military police guarding the southern border with large stones, as the latter sheltered behind riot shields.

"Let us through! Put your hands on your hearts," shouted one migrant, Jorge, who was trying to ford the river with his wife and two young children.

Dozens of migrants made it through the security cordon, but the majority were forced back.

Around 200 who made it through were later detained, authorities said. An AFP correspondent saw large groups of them being rounded up along a highway and loaded onto buses and trucks -- some after trying and failing to run away.

Mexico's migration authority said the country was ready to welcome foreigners as long as they entered the country in a "lawful, safe and orderly" way. 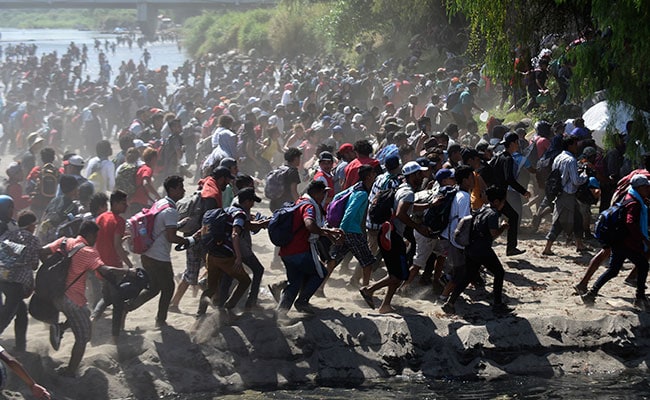 Migrants crossing the Suichate River, the natural border between Guatemala and Mexico

"They're trying to trick us. They tell us to enter the country legally, but then they deport us," said one migrant, Tania, who has been with the caravan since it set out last week from San Pedro Sula, Honduras, around 650 kilometers (400 miles) away.

But Mexico faces pressure to do just the opposite from President Donald Trump, who last year threatened to impose steep tariffs if the country did not do more to stop a surge of undocumented Central Americans arriving at the US-Mexican border.

It is the first time Mexico has forcibly turned back a migrant caravan trying to ford the border river -- a major change since the first massive caravan arrived in the country in October 2018.

That time, Mexico managed to contain thousands of migrants who tried to force their way across the official border bridge, but then did little to stop them when they illegally swam or took rafts across the river below.

Since then, thousands of Central Americans have crossed Mexico toward the United States in caravans, fleeing chronic poverty and brutal gang violence in El Salvador, Guatemala and Honduras.

Seeking safety in numbers, many travel with small children in tow, often walking long distances in plastic shoes or flip-flops.

After Trump warned of an "invasion" and issued his tariff threat in May, the Mexican government deployed around 26,000 National Guardsmen to tighten its borders.

It has also allowed the United States to send more than 40,000 asylum-seekers back to Mexico while their cases are processed, under the so-called "Remain in Mexico" policy.

Thanks at least in part to those measures, the number of undocumented migrants the US detained at its southern border fell more than 70 percent from May to December.

Lopez Obrador, an anti-establishment leftist who came to office vowing to protect migrants' rights, offered last week to give 4,000 jobs to migrants in the new caravan if they stay in southern Mexico.

But Human Rights Watch accused Mexico of violating migrants' rights by failing to guarantee the security of those returned by the United States and detaining others in "inhumane conditions".