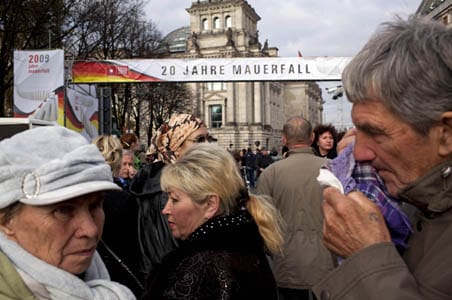 A group of Russian tourists gathered in front of the Brandenburg Gate in Berlin on Friday, Nov. 6, 2009. Europe was transformed by the events of 1989, when the Berlin Wall came down, but the events of that year are seen differently in Europe, the United S

Paris: The historical legacy of 1989, when the Berlin Wall fell and the Cold War thawed, is as political as the upheavals of that decisive year.

The events of 1989 spurred a striking transformation of Europe, which is now whole and free, and a reunified Germany, milestones that are being observed with celebrations all over the continent, including a French-German extravaganza Monday evening on the Place de la Concorde.

But 1989 also created new divisions and fierce nationalisms that hobble the European Union today, between East and West, France and Germany, Europe and Russia.

Some of the intensity of those divisions is evident in the tug of war, in both Europe and the United States, over the achievements of 1989 - whether they owe more to the resolute anti-Communism of President Ronald Reagan or its inverse, the white-glove embrace of the East by many in Western Europe.

And while many in the West saw the wheel of history spinning inevitably, causing the rise of democracy and banishing serious rivals to American power, China forestalled its own revolution in 1989 and catapulted itself to prominence through an authoritarian capitalism that the leaders of Russia are now studying.

"The Chinese ended up with a Leninist capitalism, which none of us imagined in 1989, and which is now the main ideological competitor to Western liberal democracy," said Timothy Garton Ash, a chronicler of 1989 in his book "The Magic Lantern."

It is a tribute to 1989, not unlike the French Revolution 200 years before it, that its meaning is hotly contested. Different groups in different countries see the anniversary differently, usually from their own ideological points of view.

In general, said James M. Goldgeier of George Washington University, a historian of the period, "the big question out there for 20 years is who gets the credit."

For many in the United States, he said, most of the credit goes to Reagan and his aggressive military spending and antagonism toward Communism. That view has largely eclipsed another American perspective, which was that globalization and democratization were so powerful that a Mikhail Gorbachev was inevitable, and that the Cold War ended through "soft power" - propaganda, diplomacy and the Helsinki accords.

"As the partisan divide over Reagan has dissipated, I think over time most Americans, if they think back at all, say it was Reagan who said, 'Tear down this wall,' and down it came," Goldgeier said.

Robert Kagan, a historian with the Carnegie Endowment in Washington and an editor of The Weekly Standard, said conservatives won the debate. "The standard narrative is Reagan," he said.

This is not the case in Europe, Kagan said. "If 90 percent of Americans say it was the U.S. being firm, 99 percent of Europeans think it was they being soft - that the wall fell through Ostpolitik and West German TV."

For many Americans of both political parties, 1989 seemed a wonderful example of the embrace of universal values that happened to be theirs, and some believed it was only a matter of time before all dictatorships crumbled before the same forces of strength, openness, economic liberalism and people power.

For all the disagreements, however, said Ronald D. Asmus, a deputy assistant secretary of state for Europe in the Clinton administration and Brussels director of the German Marshall Fund, what happened was simply amazing.

"If someone asked me in '89 if we would have all these countries in NATO and the European Union, I would have been incredulous," Asmus said. "We've lost sight of an incredible historical achievement - the heart of Central and Eastern Europe is at peace. All problems are not fully solved, but they are tempered, controlled and contained, and we have a better chance of solving them."

Even the brief war last year between Georgia and Russia would have been very different without NATO, Asmus argued. "These are not existential issues anymore," he said. "They're not presidential problems, but assistant secretary of state problems."

Russia remains a challenge for both the United States and Europe, but a much safer one, argues Sergei Karaganov, who leads the Council for Foreign and Defense Policy in Moscow and was an adviser to the Russian presidents Boris N. Yeltsin and Vladimir V. Putin.

In Russia, Gorbachev, the last Soviet president, is widely despised for indecisiveness and for permitting the collapse of the empire, an event that Putin called the greatest geostrategic catastrophe of the last century.

Not all Russians agree, but many do argue that the end of the Warsaw Pact should have led to the disbanding of NATO, or at least a decision not to expand the alliance to include states that were once part of the Soviet Union.

"The U.S. regarded itself as the victor in the Cold War, but Russia does not regard itself as the loser," Karaganov said. "At the very least we expected an honorable peace. Like Britain, we have never been defeated, and we remain ready to fight."

"Hindsight is seductive, but there were a number of alternative futures from 1989," said Mary Elise Sarotte, who has just published "1989: The Struggle to Create Post-Cold War Europe." "The West chose a future that perpetuated a divided Europe and left Russia on the periphery."

One result of 1989 was the end of a bipolar world, but after a brief 20-year reign the period of American unipolarity is also ending, many Europeans said.

For Hubert Vedrine, a former French foreign minister who worked then for President Francois Mitterrand, 1989 led to a Western arrogance that is only slowly deflating with the wars in Iraq and Afghanistan and against Islamic radicalism.

A scramble for power and influence among several nations and blocs of nations - Europe, China, Russia, India, Brazil and the United States - seems likely. Dominique Moiesi of the French Institute for International Relations said, "America is in relative decline, but has not yet accepted the changes, speaking of multilateralism but not accepting the consequences." In this transitional world, he said, "nothing can be done without America, but nothing can be done by America alone."

But Americans are not likely to agree with this interpretation. Robert D. Blackwill, a longtime diplomat and adviser to Presidents George H.W. Bush and George W. Bush, argues for the necessity of American leadership. "I see no evidence that America is in decline," he said.

In Central Europe itself, there are serious divisions over 1989, symbolized by the long and bitter rivalry in the Czech Republic between Vaclav Havel and Vaclav Klaus, between a softer collective polity, anchored by Europe, and a fierce individualist liberalism reluctant to give up sovereignty to the European Union that was so recently regained from the Soviet collapse.

In the eyes of many in the old West, the events of 1989 enlarged but also diluted the European Union. The union has struggled ever since over how to deepen and solidify the alliance. "There is a kind of melancholia toward Europe for part of the French, because in this whole, one has to negotiate with everyone," Vedrine said.

For Garton Ash, the divide remains between Western and Eastern Europe. "We hoped as Europeans that 1989 would be a second founding moment for the European project, and that this would become a pan-European memory and a shared cause for celebration," he said. "But that hasn't happened. 'Eastern Europe' still exists in the collective memory and we haven't purged it."

Many people in the East, of course, suffered from 1989 and the sudden, even brutal switch to capitalism. "They feel the transition was very tough on them and feel cheated and even betrayed, and are open to conspiracy theories about shady deals done at the round tables," Garton Ash said.

"It's not like the way in Britain we remember V-E Day," when Nazi Germany surrendered, he said. "It's really quite divided."
Comments
Berlin Wall