A video of 'Patron' has been posted on Facebook by State Emergency Service Of Ukraine (SES), which said that the dog has cleared 90 explosive devices. 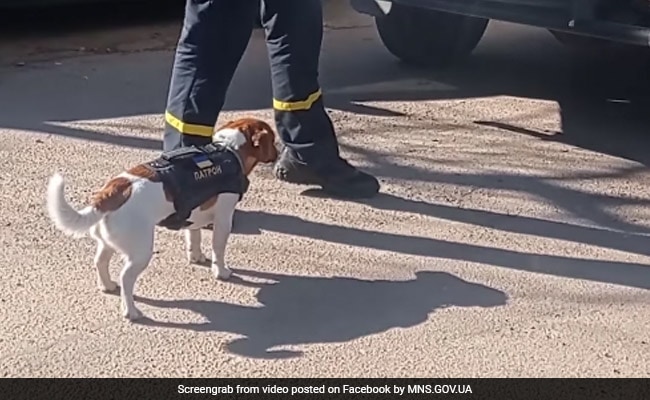 Ukraine war is full of tales of bravery. Not just humans, animals too have been doing their bit to save locals from advancing Russian soldiers. Among them is two-year-old 'Patron', a Jack Russell Terrier dog, which has become a hero for sniffing out dangerous explosives around Ukraine.

A video of 'Patron' has been posted on Facebook by State Emergency Service Of Ukraine (SES), which said that the dog has cleared up to 90 explosive devices so far.

"News from Patron! Our militant dog - the mascot of Chernihiv pyrotechnicians continues to serve! Since the beginning of the war, he and SES sappers have cleared almost 90 explosive devices. Thank you, my friend, for your tireless work!" according to an English translation of the video posted on Facebook by SES in March.

For centuries, dogs have been trained in conflict zones all over the world to perform various duties. 'Patron' has saved many lives by detecting numerous dangerous explosives and landmines in the country.

Jack Russel Terrier is a dog breed developed originally in England 200 years ago for hunting foxes. It is also called Parson Russel Terrier, and is an independent, lively and clever dog breed that is easy to train and manage. The energy and intensity of this little pup has made it popular among the Ukrainian defence forces.

“This dog is just a miracle. Please take care of yourself and him! Glory to Ukraine!” a Facebook user commented on the SES page. "Glory to heroes! Patron is among them," said another with a lot of heart emojis in the colours of Ukraine's flag.

Another user tweeted a handmade sketch of Patron.