California and other parts of the western US have been ravaged by huge and fast-moving wildfires in recent years. 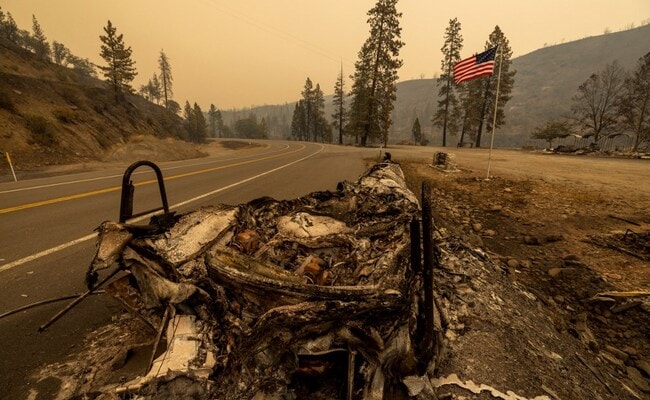 The McKinney fire is California's largest wildfire so far this year.

Firefighters in northern California were battling Monday to gain control over the state's largest wildfire this year, which claimed two lives after exploding in size over the weekend and forcing thousands to evacuate their homes.

Whipped up by strong winds and lightning storms, the McKinney Fire ripped through the state's dry terrain Sunday to spread over some 52,500 acres of Klamath National Forest near the town of Yreka -- and was zero percent contained as of Sunday night according to CalFire.

California and other parts of the western United States have been ravaged by huge and fast-moving wildfires in recent years, driven by years of drought and exacerbated by a warming climate.

The McKinney fire, which broke out Friday near the border with Oregon, is California's largest wildfire so far this year -- though it remains much smaller than last year's Dixie Fire, which burned nearly one million acres.

According to the Siskiyou County Sheriff's Office, firefighters on Sunday found two people dead inside a burned-out car on the driveway of a home in the community of Klamath River -- in the fire's path.

Speaking on ABC News, Sheriff Jeremiah LaRue said firefighters suspected the pair were caught in the fast-moving fire as they tried to flee.

More than 2,000 residents of rural neighborhoods in the area were under evacuation orders, according to the California Office of Emergency Services, mostly in Siskiyou County.

Yreka resident Larry Castle told the Sacramento Bee newspaper that he and his wife had packed up a few possessions and their three dogs to leave for the night, as other fires in recent years had taught them the situation could turn "very, very serious."

A spokeswoman for the Siskiyou County Sheriff's Office, quoted by US media, said the fire had destroyed more than 100 structures -- including homes, a grocery store and a community center -- in the area surrounding Yreka, though it had not encroached upon the town of about 7,800 people.

"Surrounding areas should be ready to leave if needed. Please don't hesitate to evacuate," the county sheriff tweeted.

Highway 96 and McKinney Creed Road southwest of the Klamath River were closed to the public, CalFire said.

Nearly 650 people were working to douse the blaze as of Sunday, the National Wildfire Coordinating Group said.

Search and rescue teams evacuated 60 people who had been hiking the area's popular Pacific Crest Trail, according to the sheriff's department in Jackson County, Oregon.

CalFire said the cause of the McKinney fire was still under investigation.

The US Forest Service said thick smoke had helped to limit the growth of the fire on Sunday, but also meant that firefighters' aircraft were "mostly grounded."

Fire crews were working above Fort Jones and west of Yreka "to cut off the fire's progress," the USFS said.

The fast-spreading blaze comes just days after the Oak Fire near Yosemite National Park destroyed dozens of buildings and forced thousands to evacuate.

California, which is facing a punishing drought, still has months of fire season ahead of it.

Other parts of the world have also faced intense wildfires this year, as scientists say climate change is making heatwaves more frequent and more intense, increasing the risk of fires.

On Sunday, both Portugal and France were tackling major forest fires as temperatures rose sharply in Europe.

In Portugal, a blaze broke out in the Mafra area, north of Lisbon, while in France at least four firefighters were seriously injured and motorways were closed.

Also over the weekend, hundreds of firefighters battled a blaze in eastern Germany, with four people injured.