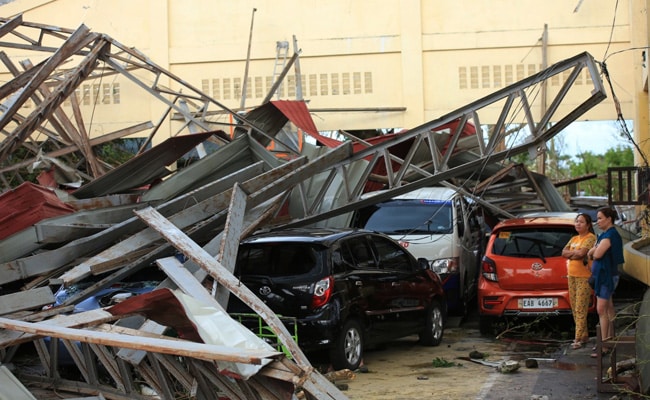 The typhoon lost intensity as it skirted Manila and headed out to the South China Sea.

The most powerful typhoon to hit the Philippines this year destroyed tens of thousands of homes and killed at least 20 people, officials said Monday, as communications to the worst-hit areas remained cut off.

Catanduanes Island and nearby Albay province on the most populous island of Luzon bore the brunt of Typhoon Goni which was packing maximum sustained wind speeds of 225 kilometres (140 miles) per hour when it slammed into the east coast on Sunday.

It lost intensity as it skirted the sprawling capital of Manila and headed out to the South China Sea.

"We are horrified by the devastation caused by this typhoon in many areas including Catanduanes island and Albay," Philippines Red Cross chief Richard Gordon said in a statement.

"Up to 90 percent of homes have been badly damaged or destroyed in some areas. This typhoon has smashed into people's lives and livelihoods on top of the relentless physical, emotional and economic toll of Covid-19."

Hundreds of thousands of people fled their homes ahead of the typhoon and many of them remain in evacuation centres as authorities scramble to restore power and telecommunications services in the hardest-hit areas.

"We have extensive damage to infrastructure and housing," Daep said.

"Many people are hungry. They had already suffered from Covid due to the loss of jobs and dislocation. Some don't even have kitchen utensils."

Seven of the victims were in a town that was hit by a landslide of volcanic ash from the nearby active Mayon volcano.

The mayor of Guinobatan told local media that around 147 homes had been swamped and some were now unlivable.

Goni was ranked as a "super typhoon" when it made landfall on Catanduanes where at least six people died and authorities estimate most houses and infrastructure were damaged or destroyed.

Most of the island's power lines were damaged in the typhoon and reports from towns were only trickling in, suggesting the toll could rise.

Across the areas in Goni's path, more than 20,000 houses were destroyed and around 58,000 partially damaged, Civil Defense said in a statement. Farmland was also damaged.

Clean-up efforts were under way with residents removing sodden furniture and other belongings from their houses as they shovelled out mud and debris after heavy rains inundated towns.

"The flood took only minutes to rise -- not hours, but minutes," Alona Espino in Batangas city, south of Manila, told AFP.