Further, lead author Professor Mariusz Salamon, of the University of Silesia, Katowice, Poland, said that the fossil is "extraordinarily preserved". 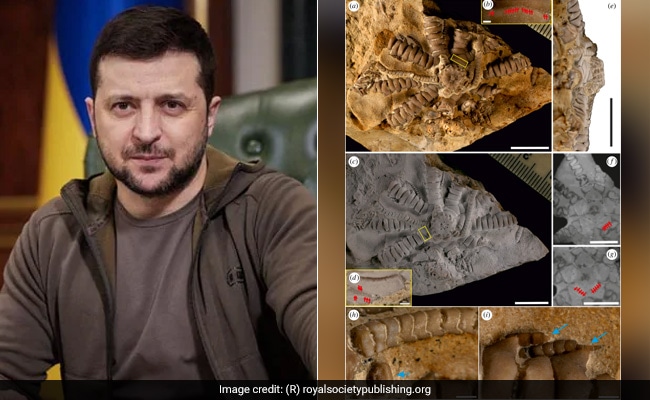 The species name honours Zelensky for his "courage in defending a free Ukraine".

Polish palaeontologists recently named a 150 million-year-old marine invertebrate after Ukraine President Volodymyr Zelensky. The well-preserved and complete fossil of the bizarre creature was discovered in the Antalo Limestone Formation of Ethiopia, Africa. It is a type of feather star and had 10 long arms and sharp tentacle-like claws to grip the seabed, researchers explained.

As per Newsweek, the palaeontologists named the species “Ausichicrinites zelenskyyi”. They said, "It has been named in honour of Volodymyr Oleksandrovych Zelensky, the sixth and current president of Ukraine, for his courage and bravery in defending free Ukraine." "Ausichicrinites zelenskyyi had 10 massive arms and a ring of claw-like appendages near the base to grip the substrate," they added.

Further, lead author Professor Mariusz Salamon, of the University of Silesia, Katowice, Poland, said that the fossil is “extraordinarily preserved”. He explained that fossil feather stars are mostly known from highly disarticulated specimens. The skin of the animal is covered with tiny ossicles, forming a protective and flexible outer shell.

The researchers said that when the animal dies and its soft tissues decay, the ossicles and organs like the arms tend to fall apart. So the discovery of a complete specimen is a rare event.

“Here, we report a nearly complete, and thus extremely rare, comatulid from the Upper Jurassic of the Blue Nile Basin in central western Ethiopia that provides a unique insight into the morphology of comatulid arms and claws,” Mr Salamon added.

He said that the new fossil is the “first example of regeneration in a feather star”. The fossil also shows signs of an old injury. Experts believe that the animal survived an attack, but lost one of its 10 arms.

Feather stars can be up to a foot long. They are born with a stem that they shed in adulthood and their feathers can have as few as five arms and as many as 200. The species are not poisonous to humans, however, they can be toxic to other animals.