The group, created in Britain last year, has carried out a wave of demonstrations around the world since Monday, primarily attempting to blockade city centre streets. 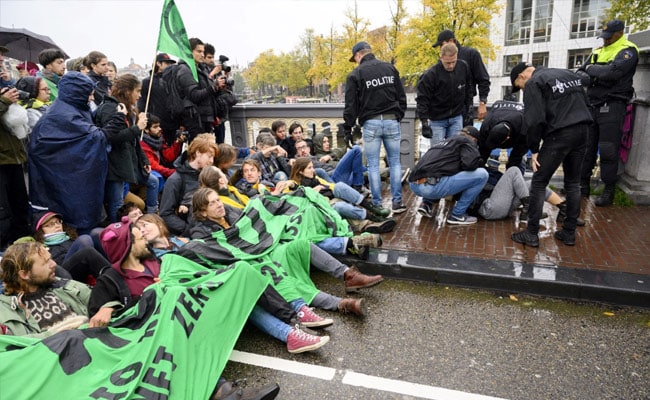 Dutch police on Saturday arrested 130 climate change protesters who blocked a main bridge in central Amsterdam as Extinction Rebellion activists disrupted traffic in front of the French parliament in Paris.

The group, created in Britain last year, has carried out a wave of demonstrations around the world since Monday, primarily attempting to blockade city centre streets.

"The police has for the moment carried out 130 arrests at the Blauwbrug bridge" in the heart of the Dutch capital, the police said on Twitter.

Dozens of activists gathered at the bridge at around 9:00 am (0700 GMT), local media said.

The historic bridge connects several districts in central Amsterdam and dates back to the 17th century.

Some of the protesters slumped on hammocks hung from pillars supporting the bridge to prevent boats from passing underneath.

Protesters have multiplied in the city since Monday, when some 80 people were arrested outside the celebrated Rijksmuseum, one of Amsterdam's top tourist draws.

In France, a few hundred activists blocked a key route to the National Assembly for a few hours but were dispersed by police in the afternoon.

"The police is not our enemy. it's the big industrialists who exploit the living and the states who let them do it," one demonstrator said.

They are backed by Greta Thunberg, the Swedish teenager whose searing UN address in September made international headlines, and by academics studying rising temperatures and sea levels.

Their protests have irritated drivers and some officials but raised the hopes of those who see climate change as a threat to the planet.

The movement is partially credited with pushing the UK government in June to become the first in the Europe Union to commit itself to a net-zero target for planet warming emissions by 2050.

Extinction Rebellion is demanding governments reach that target by 2025, as well as holding "citizens assemblies" to decide policies to achieve that aim.