Final preparations are underway for a 12-metre-long ship to set sail from Canada and attempt the world's first transatlantic crossing without a crew. 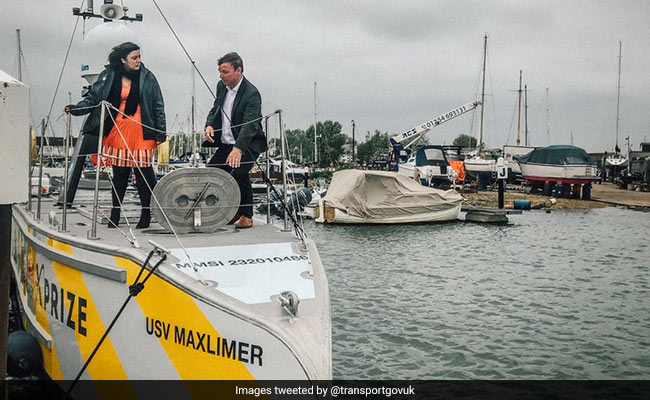 USV Maxlimer will conduct deep sea surveys on the way, guided by a skipper in a British control station.

Final preparations are underway for a 12-metre-long ship to set sail from Canada and attempt the world's first transatlantic crossing without a crew.

The USV Maxlimer, an unmanned surface vessel, is bound for the south coast of England and will conduct deep sea surveys on the way, guided by a skipper in a control station in Britain. The voyage is expected to take about 35 days.

The ship was built by Sea-Kit International, which develops vessels for the maritime and research industries, for the Shell Ocean Discovery XPRIZE, a competition to autonomously survey the sea bed.It can launch and recover autonomous underwater vehicles but has the potential to operate in different roles with different cargo."(It is) almost like a utility pick-up vehicle of the sea, it's robust, it's adaptable, it's got a huge range," said SEA-KIT International Managing Director Ben Simpson.

The vessel is operated by a hand-held remote control when in harbour and when at sea it can stream live data to the controller via multiple satellite links.

"What is now available through technology is very, very similar to what you have on the bridge of a ship and in many ways, I would argue, even more comprehensive," said James Fanshawe, a director of SEA-KIT."The controller here in this station can actually see all the way round on the horizon near real-time and in many ships it's quite difficult to actually even see what's behind you from the bridge of that ship," said Fanshawe.

The company said it sees a future for unmanned vessels as they can remove humans from harm's way.The team said ships that do not need to accommodate people also have significant economic and environmental benefits."You don't need a bridge, you don't need a galley, you don't need water supplies, you don't need air conditioning and suddenly the size of that vessel becomes a fraction of the size of vessels currently being used offshore," Simpson said.The combination of size and hybrid diesel-electric propulsion cuts fuel use by around 95 percent, the company said.