Taylor Walker-Lear was born with cerebral palsy spastic diplegia, although the condition was not diagnosed until she had trouble standing and walking by herself when she was two. 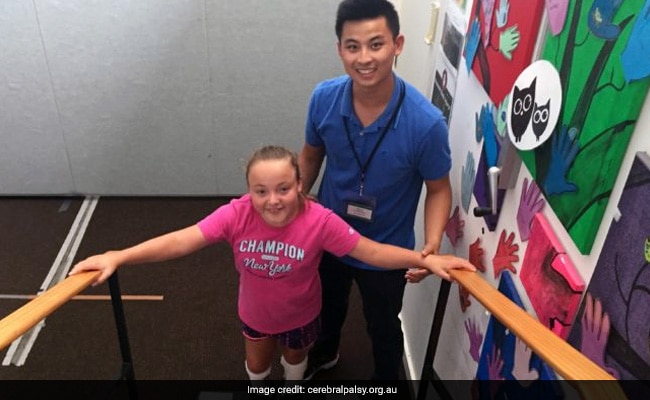 After scaling Australia's highest peak, Mount Kosciuszko, in 2015, Taylor Walker-Lear's next challenge was to visit the Great Wall. Inspired by her willpower, a Chinese entrepreneur sponsored the family's trip to Beijing, Xinhua news agency reported on Thursday.

Walker-Lear was born with cerebral palsy spastic diplegia, although the condition was not diagnosed until she had trouble standing and walking by herself when she was two.

On Tuesday morning, she arrived at the Mutianyu section of the Great Wall just outside Beijing.

Using a walker and with help from her parents, Walker-Lear first walked on a flat section of the wall, then went up and down some steps and through watch towers. The climb lasted over an hour.

The Great Wall administration presented Walker-Lear a certificate containing a quote from a poem by Chinese revolutionary leader Mao Zedong -- "One who fails to reach the Great Wall is not a hero", meaning one must overcome difficulties to reach their goal.

"I'm really tired, but I'm proud," she said, adding that the Great Wall was more impressive than she had imagined it would be.

Promoted
Listen to the latest songs, only on JioSaavn.com
At six years old, while watching the 2012 London Paralympics, Walker-Lear found a role model in Australian swimmer Jacqueline Freney, who also has cerebral palsy and won eight gold medals at the games.

She is now focused on swimming training and her long-term goal is to participate in the 2020 Tokyo Paralympics, according to her mother.

No Explosives Found Aboard Poland-Greece Flight After Bomb Alert