A species that was thought to be extinct for over a century has now revived in Colorado, the United States. 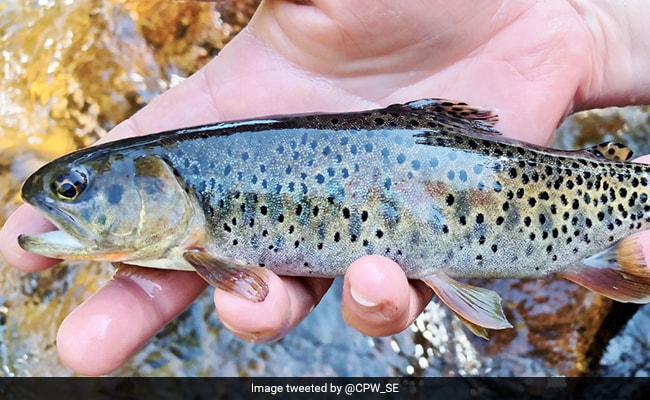 A species that was thought to be extinct for over a century has now revived in Colorado, the United States. According to a report from Newsweek, after it had been completely wiped out by mining pollution, overfishing, and competition from other species, the state of Colorado's fish, the Greenback Cutthroat Trout, was believed to have gone extinct in the 1930s.

The fish, which reproduces naturally, was discovered in the South Platte Drainage's historical waters.

A thread was shared on Twitter by the official handle of Colorado Parks and Wildlife's Southeast Region along with different photos of the fish on Monday.

The fish have been found in Herman Gulch in the South Platte River drainage west of Denver. The long-term survival and natural reproduction of the greenbacks discovered in Herman Gulch is a major milestone for CPW's recovery efforts, the wildlife park further said.

Since being shared, the post has received over 1,200 likes and over a hundred shares. Numerous users have given surprised remarks in the post's comment area.

The Colorado Parks told Newsweek that "this is huge" after more than a decade of "intensive efforts" to rescue the species from the brink of extinction.

Several endangered populations were identified in 1957, 1965, and the 1970s, but it was later determined that these were subspecies rather than pure-bred trout, the CPW stated in a press release.

Following the discovery of the species' sole pure population in 2012, close to Bear Creek in central Colorado, researchers started travelling there each spring to collect sperm and egg samples from the local fish population.

According to the release, a small population of the species was preserved in a hatchery to promote breeding and the establishment of new populations. The species was subsequently progressively introduced by biologists in a number of locations, including the Herman Gulch in 2016, Newsweek further reported.