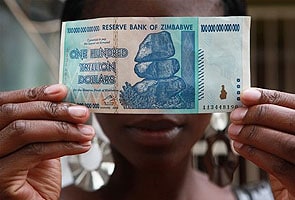 Harare: Western visitors to Zimbabwe are snapping up old, defunct Zimbabwe bank notes, preferring them to some traditional African curios and souvenirs of the nation's famed stone sculpture.

Most sought after is the one hundred trillion Zimbabwe dollar bill, the highest denomination when the currency was abandoned nearly two years ago and the American dollar became legal tender.

It sells for up to $5, depending on its condition.

"I had to have one. The numbers are mind bending," said Janice Waas on a visit to the northwestern resort town of Victoria Falls. She got hers, in pristine condition, from a street vendor who usually sells African carvings. Numerically, one hundred trillion is 100 followed by 12 zeros on the bills.

Janice's husband Thomas Waas, a physicist and engineer from Germany, said if the population of the world is 7 billion people, every single person could be a given thousands of old Zimbabwe dollars from this single 100 trillion note.

Janice Waas said Westerners were buying the bills for their curiosity value. An Australian wanted one to display in his local bar back home.

Street vendors said visitors had been so intrigued by the Zimbabwe bills that they were now running out of them, two years after a power sharing deal between longtime rule President Robert Mugabe and the former opposition leader, Prime Minister Morgan Tsvangirai, made the old currency redundant.

Visitors from countries familiar with hyperinflation, such as the Congo and other impoverished states in the region and in South America, showed less interest in the highly marked bills. Instead, most bought curios and artifacts, said vendor Lloyd Phiri, speaking on his mobile phone in Victoria Falls.

At the height of Zimbabwe's economic meltdown in 2008 when Zimbabwe's world record inflation was running into the billions in percent annually and prices were climbing each hour, the 100 trillion bill scarcely bought a cart of groceries.

Teachers reported the printing of bank notes from millions to billions and then trillions skewed their pupils' sense of numeracy, making them fail to grasp the realities of numbers.

Back then in 2008, 700 million Zimbabwe dollars bought a loaf of bread.

Scientists and physicists estimate the number of atoms in the universe at 10 to the power of 80 -- 10 followed by 80 zeros.

During the worst of Zimbabwe's economic meltdown and hyperinflation, Zimbabwe's highest money denominations were logged at 10 to the power of 25 -- 10 followed by 25 zeros -- or the equivalent of nearly one third of the number of atoms estimated in the universe.

The central bank then sliced off several zeros, but large transactions were still calculated in quadrillions (15 zeros) and quintillions (18 zeros) until the demise of the local currency.

If you are delayed at an airport during your Zimbabwe trip, play the numbers game, advises Waas, the physicist.

He posed this challenge.

Promoted
Listen to the latest songs, only on JioSaavn.com
"If the pyramids in Egypt are 5,000 years old, there are 155 billion seconds in 5,000 years and 1,000 billion make a trillion. So how many years are there in 100 trillion seconds?" he said.

Waas said he was still waiting for the correct answer from friends and fellow visitors in Zimbabwe.