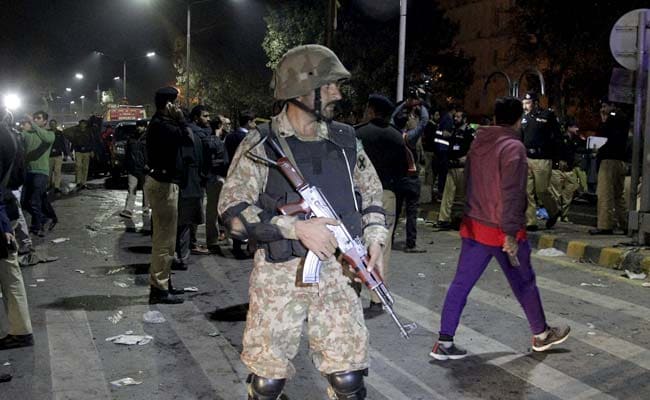 The official said all the 10 terrorists belonged to Jamat-ul-Ahrar and Tehreek-e-Taliban Pakistan. (File)

"In early hours today a CTD team were taking the facilitators (Anwarul Haq, Irfan and Imam Shah) of Lahore Mall Road blast suicide bomber to Manawan area to identify the place where they had hidden weapons and ammunition when their accomplices attacked the police team," a CTD official said. The police team retaliated and during the cross fire 10 terrorists were killed, he said.

The official said all three facilitators of Lahore Mall Road blast - Anwarul Haq, Irfan and Imam - were killed in the cross fire.

Two of the seven terrorists who attacked the police team have been identified as Attaur Rehman and Abdullah.

The official said all the 10 terrorists belonged to Jamat-ul-Ahrar and TTP. Weapons including hand grenades and explosives have been recovered from the site.

Two senior police officers were among 15 people killed when a Jamat-ul-Ahrar suicide bomber blew himself up during a protest rally outside Pakistan's Punjab assembly on February 13 that also wounded more than 71 others.

Police had arrested main facilitator Anwarul Haq with the help of CCTV and nabbed his other accomplices from tribal area of Bajaur.

Last Wednesday, five soldiers were among seven killed in a suicide attack on an army team taking part in ongoing census in Lahore's Badian Road. TTP had claimed the responsibility of the attack.

Police have so far taken 15 suspects into custody in connection with Badian Road attack on soldiers.

Police said initial investigation shows that the attacker and his handler were on a motorcycle and continued chasing the census van carrying army personnel.

Promoted
Listen to the latest songs, only on JioSaavn.com
When the van stopped and the army men started unloading the material, the suicide bomber came closer to them and blew himself up.

"We have arrested 15 suspects in connection with Wednesday's Lahore blast and are interrogating them," a senior police officer said.