WikiLeaks: 'Sarkozy emperor with no clothes' 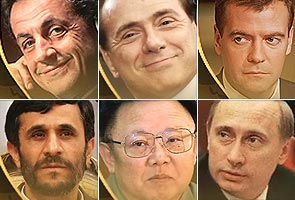 Washington: Thousands of US diplomatic messages leaked on Sunday as a first tranche offered an unflattering view of key allies and world leaders in those circles.

These are some of the nicknames used by US officials for leaders around the world:

DPA adds: The confidential assessments by US diplomats said that Afghan President Hamid Karzai was a "weak personality" who was "driven by paranoia" and "conspiracy theories".

The accounts of Turkish Prime Minister Recep Tayyip Erdogan were suspicious of him, while remarks about Kenya's leadership were contemptuous.

One exchange indicated the State Department in Washington asked the US embassy in Rome to check rumours that Prime Minister Silvio Berlusconi had private property dealings with Putin. Russian President Dmitry Medvedev was termed "pale, hesitant".

Promoted
Listen to the latest songs, only on JioSaavn.com
In an assessment of German Chancellor Angela Merkel, a diplomat marked her: "Avoids risk, not very creative."

German news weekly Der Spiegel -- copies of which went on sale in railway stations hours before an embargo imposed by a consortium of news media was due to run out -- said 90 per cent of the material involved the period from 2005 onwards. Only six per cent was labelled "secret".