The employees struck work for 52 days beginning October 5 and called it off on November 25, but the RTC management did not allow them to rejoin duty 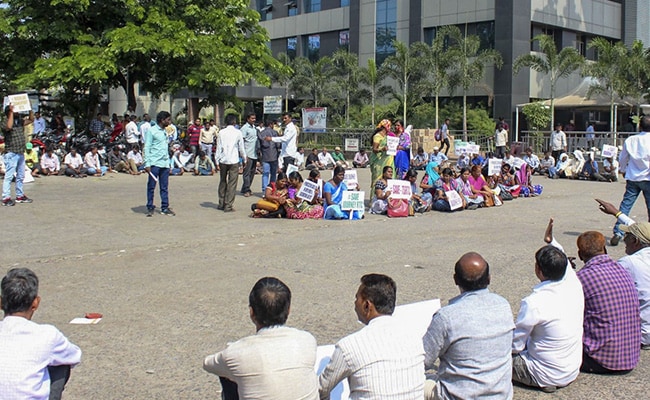 Chief Minister K Chandrasekhar Rao has announced that the Telangana State Road Transport Corporation employees can resume duty from Friday, bringing the curtains down on the prolonged ''impasse'' over the TSRTC workers' stir.

The employees struck work for 52 days beginning October 5 and called it off on November 25, but the RTC management did not allow them to rejoin duty, stating that the matter was pending before the labour commissioner.

The RTC management also said the strike had been illegal. Briefing reporters on Thursday night after a meeting of the state cabinet, Mr Rao said his government wanted the survival of the corporation and the welfare of employees.

He, however, hit out at the employees unions and opposition parties, including the BJP, for allegedly misleading and creating false hopes for the workmen and trying to gain political mileage.

"We discussed in the cabinet today. All our ministers said (that) our government saved many organisations and provided food to many. What is that we do by throwing them (RTC workmen) on to the roads."

"We should give them a chance.. They said let us have a humanitarian approach," Mr Rao said.

"So, I am conveying to workmen on behalf of state government and RTC..we will give orders to RTC after this press conference..I am conveying the cabinet decision to you first.All of you join duty tomorrow morning happily," he said.

Saying that the loss-making RTC is left with a balance of only Rs 13 crore, he said the government would provide Rs 100 crore to the corporation immediately.

He said orders would be given to the RTC managing director to raise bus ticket fares to the tune of 20 paise per km from next Monday which would bring additional revenue of about Rs 750 crore per annum to the corporation.

The additional revenue would reduce RTC's loss to some extent, he said.

Mr Rao said he would soon convene a meeting of RTC employees (about five from each depot) to deliberate on how the corporation should move forward and to take collective decisions.

Employees unions would not be allowed in the exercise, he said.

Expressing himself against employees unions in RTC, he said workers welfare council can come into existence (with the representation of two employees from each bus depot) to deal with the problems of workmen.

Slamming the unions and opposition parties for allegedly creating false hopes to the employees, he said the Congress and BJP talked about merging RTC with government in Telangana though it was not done in the states ruled by them.

He hit out at Union Minister of State for Home G Kishan Reddy and three other BJP MPs from Telangana for talking about welfare of RTC employees though they had voted for a Central legislation which allegedly allowed privatisation (in public transportation).

"There is a Union Minister here who belongs to BJP. There are three other MPs... These four had voted for (concerned) transport act which

enables privatisation in the budget session (of parliament). They should tell people tomorrow.. You vote in parliament and talk big here.. You are doing this to cheat whom?" he said.

The police said a 52-year-old driver with the TSRTC allegedly committed suicide by hanging himself from a tree in a field near here.

TSRTC employees alleged that the driver ended his life because of what they called as a rigid stand of the state government on the recent bus strike. However, police said they were verifying the exact reason for the suicide.

So far, five RTC employees have ended their lives and some others attempted suicide in different parts of Telangana after the strike began.

The RTC employees withdrew their stir on Monday last though they did not get any positive response from either the RTC management or state government on their demands.

The government and the RTC management adopted a tough stance on the strike by the employees, saying it had been illegal. Though it held talks with the workmen once, there was no agreement between the two sides on the agenda for talks.

The RTC management on Monday said the employees cannot be allowed for work though they called off the strike as the strike issue was pending before the labour commissioner as per the high court directives.

The RTC employees commenced their strike with various demands, including merger of the corporation with the government and recruitment to various posts.

However, they subsequently announced that they were ready to put off their demand for merger of the Corporation with government. The government earlier said the RTC was not in a position to accept the employees'' demands as it has been making losses.