Who Ordered Police To Fire On Tuticorin Protesters? FIR Tells All

The police said they were forced to open fire at the anti-Sterlite protesters as violence broke out during the their march to the collectorate. Chennai: The Tamil Nadu opposition's biggest question -- who authorized the police to fire on anti-Sterlite protesters last week - was finally answered on Monday. An administration officer, Sekhar, has claimed that he had asked the police to open fire, because the protesters were planning to set fire to the collectorate and the adjoining living quarters of Sterlite employees.

Sekhar, says the FIR or First Information Report filed by the police, is a junior officer in the Revenue Department. In his complaint, on which the FIR is based, he claimed ahead of the police lathicharge and firing, a warning was issued on microphone, which was disregarded by protesters.

The police said they were forced to open fire as violence broke out during the protesters' march to the collectorate. They said members of fringe groups like Makkal Adhikari and Naam Tamizhar Katchi were among the protesters and instigated the violence.

The locals in the area, however, contested the claims in the FIR. Not only was any microphone warning not given, the police did not even use rubber bullets in the beginning, as rules require, they said on condition of anonymity. 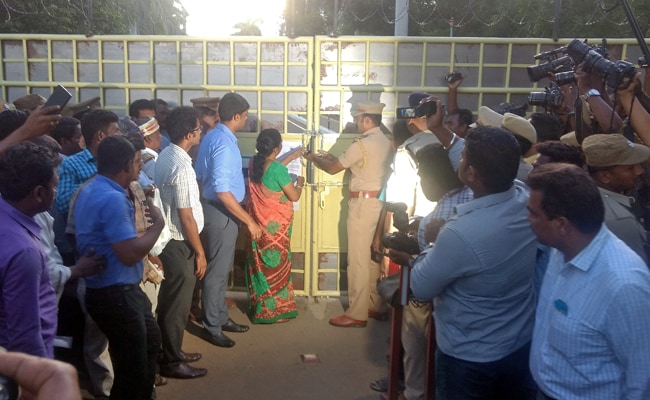 They also allege police personnel in plain clothes had set fire to vehicles inside the collectorate and adjoining Sterlite quarters in a bid to create an excuse to open fire. "For hundred days there was no violence even when larger crowds had congregated. Do you think we would bring out little children if we had any plans for violence" asked a young mother Sathya (name changed on request). She cited "instances of police personnel in uniform caught on camera torching vehicles in Chennai on the day police forcibly dispersed pro-jalikattu protesters on the Marina".

The police firing, and the violence around it that continued for two days, claimed 13 lives. It is not yet known how many people died in the firing, since postmortem of the bodies is still pending. The Madras High Court ordered a freeze on the last rites, calling for a detailed postmortem.

Promoted
Listen to the latest songs, only on JioSaavn.com
Despite the police claims of violence by protesters, a video, shot from the approach road to the collectorate also triggered widespread outrage. The video showed a plainclothes policeman crawling on his belly to open fire from a strategic position atop a bus. In the background, a voice is heard -- "At least one should die".

Chief Minister E Palaniswami has strongly defended the police action and accused the opposition of instigating violence during the protests.