In Truce Between Tamil Nadu's Top 2, Why It Is Advantage EPS Over OPS

The view that deputy Chief Minister O Panneerselvam or "OPS" wants to be Chief Ministerial candidate has gained currency ever since posters surfaced mid-August in his constituency of Periyakulam. 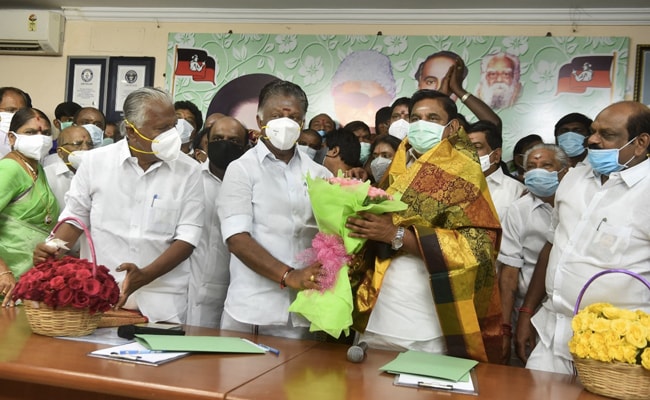 EPS and OPS put up a united show for party cadre, the media, and the people of Tamil Nadu

For all the build-up leading to the announcement, Tamil Nadu's ruling AIADMK naming incumbent Edappadi Palaniswami as its Chief Ministerial candidate for next year's elections came as no surprise.

Given that Mr Palaniswami, or "EPS", is already Chief Minister, putting out any other name a good seven months before the elections would have led to much confusion in the party.

What is important is that the party chose to end all speculation well ahead of the polls.

The view that deputy Chief Minister O Panneerselvam or "OPS" wants to be Chief Ministerial candidate has gained currency ever since posters surfaced mid-August in his constituency of Periyakulam.

Talks took place till the early hours of Wednesday, NDTV has learnt from sources. What OPS got at the end of the prolonged discussions was a steering committee that he had asked for in 2017, when he called a truce with EPS and returned to the party fold.

So the duo put up a united show for party cadre, the media, political observers and the people of Tamil Nadu. Finally, EPS announced the steering committee members and OPS announced the Chief Ministerial candidate amid cheering and applause.

What is significant is that even in the 11-member steering committee, six members are seen as EPS supporters. So the Chief Minister is likely to have the edge not only in the government but also in party matters.

What has not been spelt out is the powers of the steering committee and how much of a role it will have in choosing party candidates for the election. Whether it will just be a forum for putting to vote contentious decisions on which there is no agreement between the top two is not clear.

For all practical purposes, it is EPS Vs the opposition DMK's MK Stalin in the race for Chief Minister.

The release of expelled AIADMK chief VK Sasikala from jail by January may cause some rumblings within the party and the government before the elections, given her notorious hold over party leaders and caste equations.

EPS would hope that the influence of Sasikala and her nephew TTV Dhinakaran is minimal. There are reports that EPS wants to keep his distance from the BJP as well.

Sasikala and OPS belong to the same Thevar community. Even though OPS had fiercely opposed her takeover of the party and the government, there have been suggestions that OPS had recently reached out to her nephew Dhinakaran.

In this context, the role of the BJP could be critical in the coming months. The perception in Tamil Nadu is that OPS has the support of the BJP. If the BJP were to back Sasikala-Dhinakaran, with the Deputy Chief Minister in the mix, there could trouble for EPS.