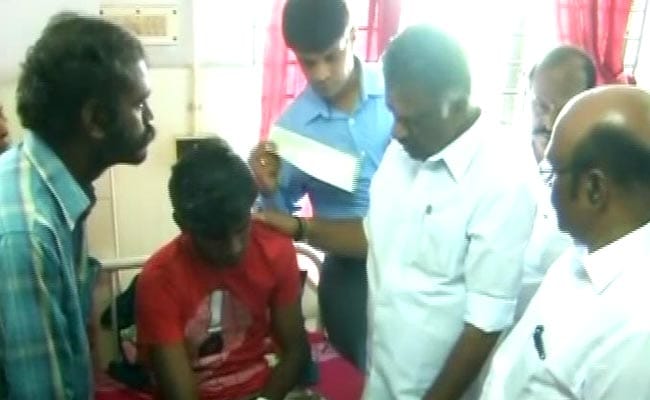 Tuticorin: Six days after the violence and police firing in Tamil Nadu's Tuticorin -- in which 13 protesters demanding closure of the Sterlite copper smelting plant died -- Deputy Chief Minister O Panneerselvam met the injured people and their families at a local hospital. Chief Minister E Palaniswami, who had defended the police and blamed the violence on "instigation" by opposition parties, is yet to visit the area.

The media was not allowed in after the ruling AIADMK faced public embarrassment yesterday, when a survivors' family had grilled a visiting minister. In front of cameras, a mother and her injured son asked minister Kadambur Raju why the government was not passing an order, closing the Sterlite plant once and for all.

Last Tuesday, the police had opened fire on locals who planned a huge march to mark 100 days' of protest against the Sterlite plant, which, they say, is responsible for causing huge environmental pollution in the area. Eleven people had died. Another person died the next day as violence broke out again. So far 13 have died. The police said they were forced to take action after the protesters started throwing stones at them and vandalised government property inside collectorate.

The opposition has blamed the police and the ruling AIADMK for ignoring the concerns of the residents. Congress president Rahul Gandhi described the use of police force as "murder" and "state-sponsored terrorism".

Over the years, many locals have suffered from cancer and other respiratory diseases. Activists said there has also been considerable air and ground water pollution, which Sterlite has been denying.

Promoted
Listen to the latest songs, only on JioSaavn.com
The Tamil Nadu government has rejected Sterlite's plea for renewal of license, citing environmental violations. The Madras High Court has stayed construction of a second plant the company was planning.

The state government has formed a commission of Inquiry, headed by retired Madras High Court Judge Aruna Jagadeesan, to probe the violence.