Why This Kerala Elephant's Death Anniversary is Celebrated 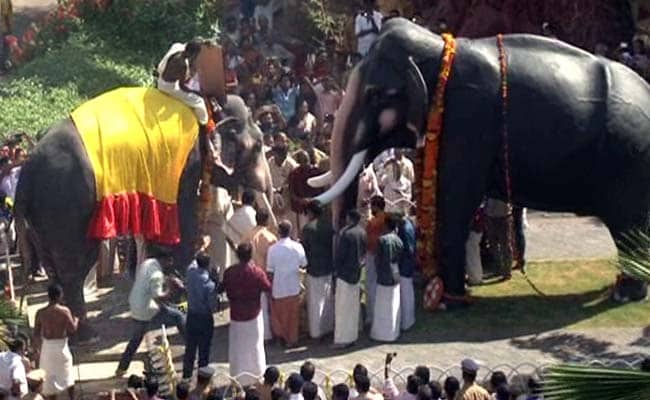 An elephant of Guruvayur garlands the statue of Kesavan.

Guruvayur: Kerala's temple town Guruvayur is observing the 38th death anniversary of its favourite elephant. This morning, in keeping with tradition, the 'chief elephant' of the Guruvayur temple, accompanied by other elephants, garlanded the statue of Kesavan in the town.

Kesavan, who died in 1976 at the age of 64, had served the Sri Krishna temple of Guruvayur for over 50 years.

As the chief elephant, it was his task to carry the idol of the deity for all the rituals of the temple.

The elephant was gifted to the temple by the Kesavan by the Valiya Raja of Nilambur in January 1922. According to Guruvayur lore, the Raja had prayed that his family and property be saved from his enemies. When his wish was granted, he gifted the elephant to the temple.

Kesavan was just a calf then, only 10 years old. But he grew to figure prominently in Guruvayur's bhakti lore. Devotees loved his majestic look, exceptional intelligence and the amazing strength.

Promoted
Listen to the latest songs, only on JioSaavn.com
From time to time, he was allowed to wander in the wild. But after a point, the jumbo would come back to the temple on his own.

In 1973, the Devaswom, the state's temple management trust, conferred the title "Gajarajan", on Kesavan. But two years later, he died following an illness.