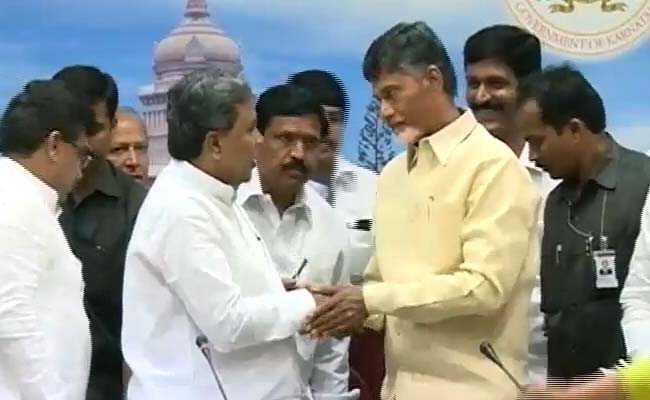 Bangalore: Looks like even top politicians take some time to get used to the names of their neighbouring states.

During a meeting today in Bangalore, Karnataka Chief Minister Siddaramaiah made a serious faux pas when he introduced his Andhra counterpart Chandrababu Naidu as the chief minister of Seemandhra. Fortunately, the Andhra Pradesh Chief Minister did not seem to mind it as he smiled and corrected him.

Infact, it was a day of bonhomie as both chief ministers, otherwise known for their rivalry in the IT sector, were not just all smiles, but also went a step ahead and exchanged gifts.

While, Mr Naidu presented Mr Siddaramaiah with an image of an idol from Tirupati, the latter placed a traditional Mysore turban on his counterpart's head.

Mr Naidu, who was in the city last week to pitch for IT investments in his brand new state, is of course credited with much of the success in turning Hyderabad into a power house.

At the same time, when it comes to IT, Karnataka has always been way ahead of the rest of the country. Mr Siddaramaiah recently described Infosys as a child of Karnataka and said his government would speed up connectivity to a new electronics park where IT firm Infosys is setting up a unit.

Promoted
Listen to the latest songs, only on JioSaavn.com
However the two leaders claim that this rivalry was not at all a part of the meeting, held today to discuss the modernisation of the irrigation canals of a river whose waters the two states share. Instead, there were warm handshakes.

Karnataka and Andhra IT rivalry