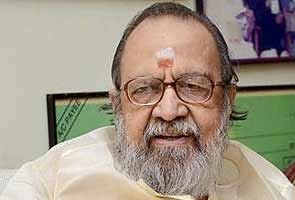 Chennai: One of Tamil cinema's celebrated lyricist, an evergreen poet, Vaali, who ruled the film industry for over five decades, passed away in Chennai on Friday. He was 82.

He died due to respiratory illness in a private hospital.

Vaali, who acted in Tamil films such as "Sathya", "Hey Ram" and "Parthale Paravasam", had also penned the biographies of Rama, Krishna and Ramanuja. He even wrote an autobiography titled "Naanum Indha Nootrandum".

Born as T.S Rangarajan, he rechristened himself as Vaali, since he was a devoted fan of artist Mali.

Before picking up the pen to write, he worked with All India Radio (AIR) for a brief period of time. He was also actively involved in Tamil theatre and even directed a few plays.

He came to Chennai in 1950 and struggled for many years. He wrote his first song in 1958 for the film "Azhagarmalai Kalla", but his much needed recognition came in 1963 with the song "Idaythil Nee" from the film "Karpagam".

In 1964, Vaali penned the lyrics for the song "Thottal Poo Malurum" from the film "Padagotti" featuring late Tamil Nadu chief minister M.G Ramachandran (MGR). The song went on to be a chartbuster, and subsequently he wrote for almost all films of MGR.

Besides MGR, Vaali also wrote several songs for Kamal Haasan and Rajinikanth. In the last decade, he wrote songs for young actors such Dhanush, Siddharth and Suriya.

Known to be the nemesis of lyricist Kannadasan, Vaali only went on to be called his heir-apparent. Even though both were professional rivals, but in real life they were considered best friends.

Promoted
Listen to the latest songs, only on JioSaavn.com
Vaali has more than 10,000 songs to his credit. In his illustrious career, he has penned several chartbusters such as "Naan Aanai Ittal", "Moondrezhuthil Yen Moochirukkum" and "Puthiya Vaanam, Puthiya Boomi".